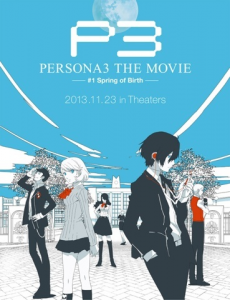 Every time our favorite video games get an adaptation, the entire nerd world seems to shake at foundation and nerds go on rampages that rival the LA Riots. Now, people are going to have to protect their loved ones again because one of the most innovative RPGs ever is not only getting an anime movie, but it’s only the first in a series of movies. The game, Shin Megami Tensei: Persona 3, the movie Persona 3 the Movie: Chapter 1, Spring of Birth.

If you’ve never played Persona 3, here’s a quick description since the movie will follow the same plot line. The main character Makoto Yuki (that’s the official name, but in the game you can name him whatever you want) moves back to Port Island after moving away ten years ago following a mysterious incident. Upon arrival, he finds himself trapped in the Dark Hour, a hidden hour that only certain people with a power called Persona can experience. Those without Persona are transmogrified into coffins and have no recollection of anything that occurs during this time. Makoto moves into his dorm and finds out that everyone in the dorm is a Persona user. He also learns that they fight mysterious monsters known as shadows under the guise of a school club called SEES or the Specialized Extracurricular Execution Squad.

Staying true to the video game, pretty much all of the original Japanese voice actors will be reprising their respective roles for the movie. Isamu Tanonaka, the original voice actor for Igor, unfortunately passed on in 2010; however his memory is living on in Spring of Birth as he will still be playing Igor, all from archived audio recordings.

The movie is set to release in Japan on November 23, 2013. There seem to be no plans as of yet to license the movie for English audiences, but we all know that one way or another Western fans will obtain the movie. Here’s a taste of what’s to come with Persona 3 the Movie: Chapter 1, Spring of Birth.