When news about another South Park game surfaced last year, we were a bit skeptical to say the least. Past releases have been mediocre at best, and their attempt at a first person shooter was just tragic. Luckily, things are looking up based on this first batch of screen shots. The artistic style seems to match the television show perfectly – just see for yourself! 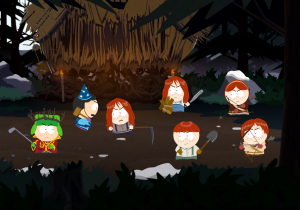 Obsidian Entertainment, the minds behind titles such as Neverwinter Nights 2 and Fallout: New Vegas, will be developing the South Park RPG. Gamers will be able to choose from five classes: Fighter, Mage, Thief, Cleric, and the Jew (which will play like a paladin/monk fighter). Best of all, Trey Parker and Matt Stone are contributing a lot to the script, so we can expect to see the same kind of humor translate to the PC, Xbox 360, and PS3 when this is released later in 2012.

Check out our previous stories for more info (here and here).