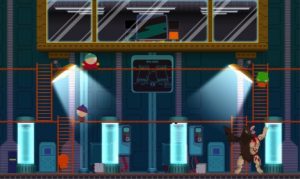 South Park Digital Studios has recently announced that a new South Park game is to be released exclusively on Xbox Live Arcade. The game, titled South Park: Tenorman’s Revenge, will follow the adventures of Kyle, Stan, Cartman and Kenny “as they battle Scott Tenorman and his Ginger army.” This platformer will feature both local and online four player co-op.

Not much information is available, but the game is being developed by Other Ocean Interactive (whose previous work includes the stellar Dark Void Zero), and Microsoft Studios will be publishing the title. Expect more news to be revealed throughout New York Comic Con (which kicked off today). South Park: Tenorman’s Revenge will be releasing in Spring 2012.