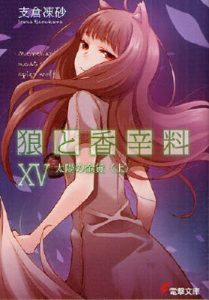 Alongside the Japanese release of the 15th volume of the Spice and Wolf light novel series, Isuna Hasekura has announced that this is the series’ final storyline. Hasekura has not announced how many more volumes it will take to complete this story arc. He began publishing the series in 2006 and won second prize from Dengeki for the first novel in the series.

The series takes place in a medieval era and follows Kraft Lawrence, a traveling merchant who happens upon a wolf-goddess named Holo in his cart one day. The story focuses on Lawrence’s business, his dealings with religion and the relationship between him and Holo as they journey towards Holo’s homeland.

The Spice and Wolf novels have spawned 25 anime episodes, a manga series, and two Nintendo DS games in Japan. In North America, Yen Press publishes the light novel series and the third novel is due out in December. FUNimation licensed the two anime series based on the novels, and has previously released the first 13 episodes on DVD.