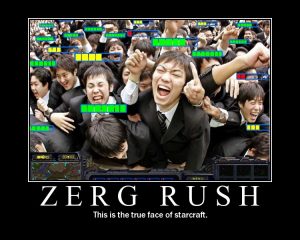 On the heels of a cheating scandal for Starcraft and a curfew for under-aged gamers, now the most anticipated game in this small countries history has been given the dreaded Adult Only rating according to the Korea Times.

The decision was made by the Games Rating Board, a unit of the Ministry of Culture, Sports and Tourism. Blizzard has 30 days to file an appeal. The reason for the rating appears to be based on the game’s level of violence, foul language and depiction of drug use.

A Blizzard Korea spokeswoman said the company has yet to decide whether to challenge the decision by Korean game censors. Should Blizzard opt to adjust the disputed parts of the content and retry the whole reviewing process, as it did with the first game, the release of StarCraft II would likely be delayed until next year.

So pretty much expect a delay in the game release at this point as there is no way they will exclude themselves from the Korean gaming market.