Last night was the annual NIS America press event where they announced three new games and one new anime series as well as the continuation of a second series. Surprisingly, the word Disgaea doesn’t appear in any of the releases below, but that doesn’t mean that there absolutely won’t be a Prinny cameo somewhere. 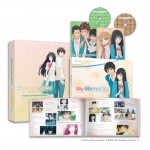 It’s a great show for anime fans who like drama and slice of life series, having a solid story and nice character development thus far, but it definitely doesn’t have enough action to draw in hardcore shonen anime fans.