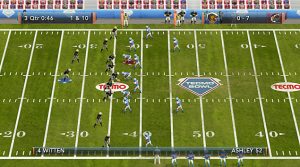 It’s no secret how much people loved Tecmo Bowl and Tecmo Super Bowl on the original NES and in the arcade, but it’s been nearly twenty years since we’ve seen a new incarnation. Yes, it’s been released on the virtual console for the Wii since then, but those graphics don’t hold up very well on a big screen TV. Cue Tecmo Bowl Throwback, coming to XBLA next week for 800 Microsoft Points. While the graphics of this reincarnation are not earth shattering, they will certainly look better than the NES version, but you will still have the option of switching back to a 2-D mode for that true throwback feel.  Tecmo Koei has also announced that the game will be released on the PSN, but hasn’t disclosed a date for release yet.