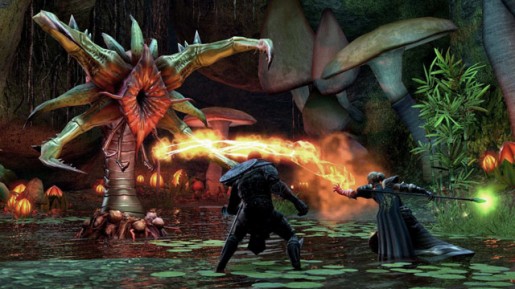 Matt Firor, game director for The Elder Scrolls Online, sat down with Game Informer and teased some new info about the upcoming MMO. According to Matt, the MMO will have a single player story. Sure, a singleplayer story is weird for a MMO, but he offered up a brief explanation.

The last thing you want to do is have the final confrontation with Mehrunes Dagon as he’s stomping across the Imperial City, and you see like 15 guys behind you waiting to kill him because they’re on the same quest.

He also went on to say

As MMO online designers, the thing we wanted to make sure we hit the most was that feeling that you’re awesome, you’re the hero,

And we do that through a mix of technology, where when I am confronting a major foe in the game, I’m doing it in an instance where I am alone.

And we have a whole part of the game that is 100 per cent solo, which is the main story, where the world focuses on you – you are the hero, everything you do is solo and the world reacts to you that way.

So what do you think? Would you rather fight Mehrunes Dagon by yourself or with a team of you and your best friends? Comment below.