[Editor’s Note: This article is part of our celebration of The G.A.M.E.S. Blog’s 5th anniversary. Each month, one article will be centered around the number five in some form or another. This month’s article is a review of the fifth game in the Mario Kart series: Mario Kart DS.]

Ah, game rage thy name is Mario Kart. In celebration of The G.A.M.E.S. Blog’s fifth birthday and the release of Mario Kart 8, I’m going back in time to play the classic that is Mario Kart DS–the fifth console game in the 21-year-old franchise. How does it hold up 9 years later (Yes, you read that right.)? Well, read and find out.

The noticeable element that stands out when replaying Mario Kart DS  is the graphics. I’m afraid to say, I mean that in a negative way; they now seem very dated and choppy, particularly when compared to Mario Kart 7. It didn’t really feel as if it utilized the DS’ graphical potential. At the time, it may have been great, but when compared with games of a similar release date like Nintendogs, those other titles appear to have far cleaner lines. Its not really a huge issue as a game’s graphics rarely have a bearing on gameplay, especially a racing game, but to those gamers who need good graphics, they may not enjoy the overall look of Mario Kart DS.

Other Mario titles will try to put some sort of story together, like Mario Party, Mario Golf and Mario Tennis. But this is Mario Kart; there is no story. I think we can all safely assume that Mario and Bowser put aside their differences for a weekend and decide to go karting. Despite this, the Kart franchise works well without a story and has done so for over two decades. Changing this formula would probably be a bad thing, so good on Nintendo. 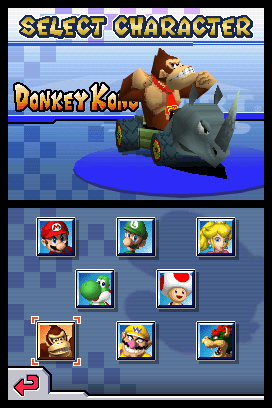 In regards to Nintendo there is one thing they’re are consistent with in their games, it’s their soundtrack. We all know the timeless classics like the Mario and Zelda themes, so it’s no surprise that the music and sound effects in Mario Kart DS are top notch- from the standard sounds of the item box activation to Rainbow Road’s music. The soundtrack adds to the whimsy of the game and is one of the most memorable aspects of the franchise. Thank God that Mario Kart DS removed Daisy’s irritating, ear-numbing “Hi, I’m Daisy!” scream that haunted players in Double Dash. Nintendo, you’ve done us all a favor.

It’s fair to say Mario Kart DS, like the rest of the franchise, has pretty basic controls. At its heart it’s just “hold A, move left and right.” Not to say this is a bad thing, most certainly not. There are more advanced techniques of course: knowing when to use weapons or hold them, snaking, drifting and speed boosting. The latter making a great return in this version. Jumping before a speed boost was removed from Double Dash, making it more difficult to pull off. Thankfully, it makes a return, which makes the controls far easier. The games are easy to navigate and play, which makes it great for the younger players and yet, the advanced controls make the more hardcore gamers get more out of it. I’m pretty glad Nintendo didn’t utilize the touch screen in order to control the cars–it would have made the game very gimmicky. However, in battle mode, there is one gimmicky aspect: an optional way of blowing the balloons up is to blow into the mic. This is rather inconvenient in the heat of the battle as you’re required to stop in order to blow them up. Holding select does the same but you still need to stay still. It is the only control issue within the game, which is a deep shame considering the battle mode is otherwise in top form. 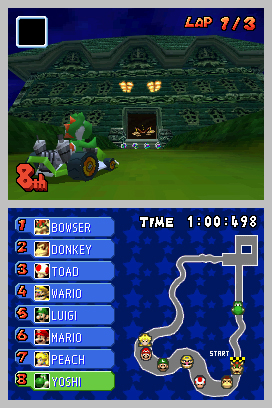 Similar to the controls,  the difficulty of Mario Kart DS tailors to both beginners and seasoned players. 50cc is basically easy mode–slower kart speed and some daft A.I make it good for beginners. Then in 100cc things get slightly tougher. It continues like that until Mirror when all Hell breaks loose: Computer characters become your worst nightmare and the dreaded item bombardment begins, taking you from first down to sixth in mere seconds, making you question whether the game has it out for you. The difficulty of the game fluctuates, of course, based on the choice of kart and character and depending on which track is being played. The difficulty also increases with the Mario Kart DS exclusive feature of the single player challenges–which start off basic (collecting 10 coins on a straight track) but get progressively harder, having to drive backward through courses, collecting coins and one mess up means doing the whole thing again.

Personally, Mario Kart is my favorite gaming franchise of all time. Each time I play a new one, I greatly enjoy each new change (with the exception of Double Dash and its two-person kart and atrocious handling, but that’s a rant for another day). With the DS edition, I enjoyed the variety it offered. It was one of the first, if not the first, Kart game to have more playable characters than there were positions in a race, proving to be the catalyst of the later huge character cast of Mario Kart Wii. There was a creative element with the emblem creation that should have stayed in MK7, considering the far larger online play, and the missions added more to the game’s original race and battle formula.

Overall, despite the dated look of MKDS, it is still very much enjoyable with the usual Mario Kart formula and DS exclusive features. Play it for nostalgia or just play it because you love Kart!