Being an author is tough, especially if you are a famous one. You have to deal with crazy fans, potential writer’s block, the opinions of your editor and publisher among many other problems that could surface. If you want to be a famous author, you are most likely willing to face these challenges. But what if being an author meant you had to deal with masochistic editors, rival authors who show up at the worst of times and reincarnated Dachshunds. What if you were Shinobu Akiyama? 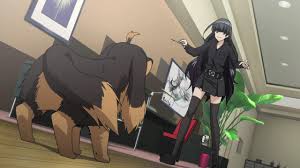 Kazuhito Harumi, the main character of Dog and Scissors (Based off the light novel by Shunuske Sarai), is a nerdy bookworm who has no time for anything else but his books of course. He buys them, reads them, he obsesses over them and even has his own mini library in the apartment next to his. Out of all the books he reads, his favorite author is Shinobu Akiyama who has written hundreds of books. One day while Kazuhito is reading in a restaurant, he is subject to a robbery that changes his life. During the criminal’s rampage one woman refuses to follow his instructions, let alone acknowledge that he is there. Trying to defend her, Kazuhito confronts the criminal and is fatally wounded. While his soul moves into the afterlife, his only regret is being unable to read the unreleased finale to his favorite book series by Shinobu Akiyama . His refusal to die is so strong that he is reincarnated. Wait for it: as a Dachshund  He is then adopted by the woman he saved, and not only can she read his thoughts, but she is Shinobu Akiyama, the author he has been idolizing his whole life. Of course her real name is Kirihime Nastuno since Shinobu is a pen name. 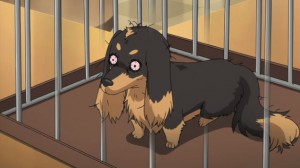 While the plot introduction is weird enough, it’s the cast of characters that take this series to a new level. Starting with a reincarnated canine, who is adopted by his favorite author, they begin to share a love/hate relationship that borders on bestiality from time to time. Kirihime, the author, is a sadistic woman who loves to torture people, Kazuhito especially, with her weapon of choice — Hasajiro, which are a pair of extremely durable scissors (now the title makes sense) . There are periods where she fantasizes about Kazuhito, in dog form, including a montage where she imagines them getting married, and having human/dog puppies.  Added to the list of characters is Kirihime’s masochistic editor Suzuna Hiragi, who tries to be abused by Kirihime at every turn; Kazuhito’s sister Madoka, who makes curry that defy’s logic and physics; and a couple of rival authors, one who befriends Kirihime and the other who is an idol at the same time. When the latter attempts to confront Kirihime, she is always dragged off by her security because she has prior engagements. 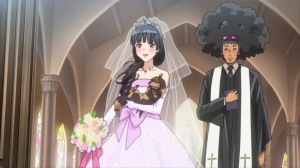 The art style of Dog and Scissors is a combination of a more modern style, mixed with exaggeration, which is the perfect way to describe the anime itself. While the backgrounds and backdrops are typical, they are expertly done and set the atmosphere. The two most distinct parts of the art styles are the character designs and the way the “battles” are drawn. Each character’s personality is exaggerated not only with how they act, but with the way they are styled. For example Suzuna, the masochist, is drawn in a demented fashion. She has reddish eyes and her smile is always borderline creepy. When she isn’t smiling, she almost always has a drooling expression as she is getting ready to be tortured. In fact,  many of the characters have dual personalities such as Madoka, the innocent character who can turn into a sadistic woman with a large electric knife. Or Hami a timid author who possesses a cold and calculating demeanor and actually proves to be the closest thing to an antagonist in the series  Everything from their clothing to their facial expressions conveys their personality and alter ego with perfect precision. 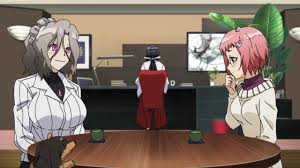 Throughout the series Kirihime has to battle different characters that range from sword fights to writing contests. When participating in the sword fights, the characters that fight usually have a blade that magnifies who they are. Kirihime carries her scissors, Madoka with her being a cook carries around her electric knife,  and there is even a maid who’s blade resides in her broom handle. These fights take on a serious tone, resembling the samurai fights you see in other anime. The other battles that take place are the writing contests. The way the writing battles are portrayed also add to the characters personality. Against Hami, Kirihime must win by being the first to write a hundred page manuscript. This battle takes place in a library which represents Hami’s shyness. Another writing battle is with the writer/idol Maxi Akizuki. She takes pride in being the “brightest” no matter where she does, so when she challenges Kirihime, the battle takes place on a giant stage in the middle of the city. 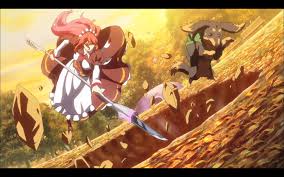 As with everything else in this anime, the music can switch dramatically in a matter of seconds. Everything is complimented from the battle scenes, where the standard action music is playing, to the lovey dovey music when Kirihime is fantasizing about her. What strikes me most about the music is the theme song “Wan Wan Wan Wan N_1!!” by Inu Musume Club. An opening theme needs to convey the atmosphere of the anime from the start and this one does . Taking a page from Baka and Test’s theme, it starts off calm and soothing,but quickly becomes frantic, throwing the song in your face  The song changes beats and melodies many times and provides all the characters in a flashy fashion, accompanied by weird dancing and characters dressed as furries.

Despite its confusing title, Dog and Scissors is an anime worth watching. If nothing else it at least shows that an authors life could be more exciting than everyone perceives it to be. But then again maybe it’s a good thing that people like J.K. Rowling or Stephen King don’t have to deal with what Kirihime and Kazuhito had to go through or else we wouldn’t have the great books they’ve written. Although we have heard Stephen King’s life can get weird sometimes, so maybe we should make an anime out of that.