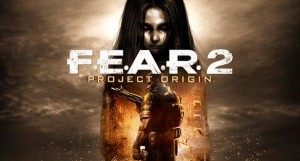 It’s the month of Halloween, and in the spirit of the spooky holiday, our G.A.M.E.S Vault entry is one of my favorite horror games, F.E.A.R 2.: Project Origin. The F.E.A.R. franchise has given me some of the worst jump scares I have ever experienced with a horror game. Full disclosure, I am somewhat of a wimp when it comes to horror games (I can’t handle the stress); however, there was something about my playthroughs of F.E.A.R that compelled me to keep going, even after screaming when something killed me from behind and the ensuing wiping off the embarrassing amount of sweat from my forehead. I have played F.E.A.R. 1, 2 and 3, but the second installation in the series has been my favorite. The added features to the gameplay mechanics, the storytelling is improved, the graceful switch between firefights, mech battles, and running around with a shotgun screaming “Oh, fuck! Oh, fuck!” as you’re being chased by terrifying mutants, fully immersed me in the universe and stuck with me all these years.

F.E.A.R., or First Encounter Assault Recon, is a task force that specializes in handling paranormal bad guys. A little cheesy? Sure, but that is part of what makes the horror genre so special, and what drives you to binge watch another bad horror film after the other. The story centers around the sinister exploits of Armacham Technology Corporation (a company primarily focused on developing advanced technology, mostly weapons) and the experiments they conducted on a highly psychic girl named Alma Wade. Needless to say Alma becomes royally pissed off by ATC’s invasive experiments and allows her true psychic potential to run rampant, causing cataclysmic events.

While the first and third F.E.A.R. titles put you in the shoes of the reverent Point Man, Project Origin follows the story of Michael Beckett. Mr. Beckett and his Delta Force squad are responsible for bringing Genevieve Aristide, the president of Armacham, into custody. Before they are able to bring in Aristide, Point Man blows the facility sky high, scattering Beckett’s squad, who are then taken to an underground hospital to have lovely experiments done to them. Next, you find, as Beckett awakens, that the hospital to be in shambles complete with blood stains on the walls and floor, eerie shadows, flickering lights, and something stalking your every move. What ensues is a terrifying campaign that uncovers the truth behind Project Origin, Alma’s past, and how Beckett is connected to it all.

F.E.A.R. has always done a great job at placing you in environments that feel unique, which is a testament to the horror genre considering everything now feels cliche and stereotypical. Yes, the setting is not necessarily groundbreaking as they put you in the typical blood-soaked hospital, abandoned-yet-creepy elementary school with weird writing on the walls, government facilities, etc. However, the typical horror environments are new and refreshed thanks to Monolith’s cutting edge graphics, physics, and sound, at least for the time it was released. One of F.E.A.R.‘s strong suits is its attention to detail. When you’re moving throughout the set pieces, everything feels so alive and wonderfully sinister. F.E.A.R. captures the aesthetic of walking through a haunted house, each new noise and shadow playing with your psyche even more as you try to rationalize, “It’s just the wind, it’s just the wind.” But somewhere in the back of your mind you create a monster for the noises all around you, following you, getting under your skin until you eventually forget all sense of logic. As you begin to lose yourself within the confines of your own sanity, the thing you’re most afraid of sneaks up from behind and tears you apart. This is what it feels like to play F.E.A.R. The game’s atmosphere mirrors the descending sanity of Beckett and the player’s. Roaming through the hospital, school, or whatever ghostly scenario the game throws at you, there is a real sense that you’re being followed, watched, being too loud, or have just entered something truly disturbing. The shadows bounce on the while with realistic flutters; footsteps, or the knocking over of an object tease the player; the jump scares are unpredictable, releasing a guilty smile and admittance that they really got you this time. Although the graphics and physics are superior, the game would not be half as scary if it did not have its pristine audio.

The screams, growls, whispers all resonate with paralyzing weight as they surround and consume you. At any given moment, something could whisk by you and set the room on fire with a realistic boom and ignition. As you investigate a noise in another room, a small girl may appear in front of you, seemingly innocent (if you’ve watched enough horror movies, you should know better than to walk toward her, but unfortunately, this is a video game, so you have to), only to burst into flames and exit with a shrill. You could be in a heavy firefight, firing deafening shots, slowly becoming overwhelmed by the enemy when all of sudden they burst into flames. If I have one complaint about the game, it’s the overuse of fire.

Now, these descriptions are not spoilers, rather an explanation of the unpredictability and how the sound effects the playthrough. It’s as hard to predict as the jump scares. The sound could be low and eerie for minutes on end, filling you with a false sense of safety, and then shift to pulsing and unforgiving. The audio is a triumph and part of what makes F.E.A.R. so memorable, next to the gameplay of course.

The franchise has always boasted about its intelligent A.I., and they have every reason. The enemies are ruthless. They are intense, smart, and will use strategy to their advantage whenever possible to overcome you, which prevents the combat from turning into mindless shooting arenas. Thankfully, though, there are enough tools at the players disposal to handle the A.I. The franchise is known for its slow-mo shooting, or bullet time for lack of a better phrase, which allows you to exploit your enemies and really play with the rag doll physics. There are an array of weapons to use, as well as mech suits, and varying enemy types to keep you on your toes. During my playthrough, I was happy to see that I actually had to think when it came to difficult combat scenarios, instead of shoot, wait for the enemy to get out of cover, lob several grenades, and shoot some more. It is not your typical run-and-gun shooter, which is something that should be appreciated.

There are many horror titles to entertain yourself with during this spooky month, not to mention awesome new titles available. I cannot force you to dig out your PS3 and return to 2009 when you have a brand new PS4 staring you in the face. What I can do is politely suggest F.E.A.R. 2: Project Origin and say that you will not regret it. It has intense gameplay, jump scares, a decent story, and mixes genres nicely between shooter and horror. So, if you’re feeling nostalgic and looking for a horror game that you may have missed, never got the chance to play, or something for your Twitch feed, especially if you’re doing a seasonal stream, give F.E.A.R. 2 a chance. I do not think you will be disappointed.