Not every princess needs rescuing. Not every princess is trapped in a tower, or being guarded by a dragon, or waiting to be rescued by some random plumber. While plenty of princesses have played the damsel in distress, others like to take matters into their own hands. These princesses are out to prove that they don’t need a man to be amazing. And then, there are some princesses who take being amazing to badass levels and just hack and slash their way into our psyche. These not-so-fair maidens gain the nickname of Murder Princess.

Produced in part by Bee Train, the company behind the .//hack anime series, Murder Princess is a fantasy/action anime with a huge dose of violence. The story starts off with a scientist initiating a coup d’etat against Forland Castle using genetically created monsters and two cute but sadistic little girls. While the scientist, Dr. Akamashi, doesn’t do any fighting on his own, his robotic girls and man-made monsters go through the castle ripping people to shreds and painting the walls a dark shade of red. Before they reach the throne room, Princess Alita is given a chance to escape, by having her maid take her place as a fake princess. While escaping she accidentally runs into a bounty hunter named Falis, and they are flung off a high cliff. Luckily they survive but during their near death experience, Alita and Falis’s souls switch bodies in a process known as spiritual commutation. Seeing no other option, Alita enlists the help of Falis and her cyborg partners (Shinigami in the manga) Dominikov and Pete Armstrong, offering her body, mind and soul as collateral, in exchange for her retaking the castle. Falis agrees and starts a campaign to protect the kingdom until Alita’s brother returns from his mission. 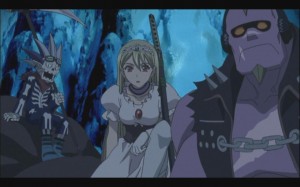 Being a relatively short anime (6 episodes), you get introduced to all the characters fairly quickly. Alita is your standard damsel princess, and Falis is your standard bounty hunter–at least, before the body switch. After Falis clears the castle, in Alita’s body, she is coronated as the queen since the previous king was killed following the events prior. Alita then takes up the role as the “queen’s” stewardess, along with Jodo, who is the butler to the royal family. These role reversals offer unique challenges to the characters, as Falis’s violent nature shows when she is fighting off monsters during royal parades and other engagements. The people of the country love having a warrior as a queen, but are wary as well since Falis has lost control more than once and nearly killed an innocent bystander. It does make things a bit easier on her having Alita on hand to do damage control, plus her cyborg buddies to help her out in the battles. 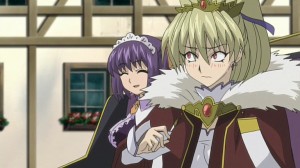 As if trying to be a graceful princess wasn’t hard enough on it’s own, Dr. Akamashi likes to complicate things a bit by constantly trying to take her out. Maybe it’s the way she killed all his creations and broke his dolls or the way she compares his head to an onion on more than one occasion. However, as the story progresses, it turns out that he is a one of the more sympathetic villains, and soon he is done away by a more antagonistic witch, Ceclia and her companion, a dark knight who may or may not have ties to the kingdom and Alita.

As the name of the anime implies, there is a lot of action, violence and blood. Each episode has plenty of battles and, more often than not, someone is about to start spurting blood like it’s Kill Bill. The cool thing about it is that there are more than just swords that are wreaking havoc. On Falis’ side, Dominokov who uses a scythe and Pete Armstrong and his fists. Meanwhile, Dr. Akamashi’s robotic dolls using different blades as well as some serious firepower and Cecilia wields destructive magic. 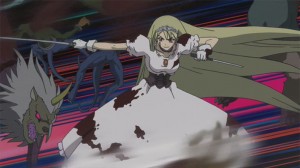 Character design is distinct yet sometimes resembles other works by Bee Train. The witch Ceclia looks like she could be related to past .//hack protagonist Mimiru. Alita and Falis both have different character designs when in their respective bodies. As their normal selves in the beginning, Princess Alita looks innocent with her big eyes and flowy princess hair, while Falis with her shorter purple hair and demeanor gives her the look of a badass. When they switch bodies they take their characterization with them and it shows in the design. When Falis becomes the princess, her eyes lose that innocent look and her hair is put up similarly but in a way that exudes intimidation. When Alita switches into Falis’ body, everything becomes more innocent and pure. Her hair doesn’t look so menacing and a quick change of clothes makes her look respectable.

The music, as it should, conveys the right moods for the anime. The battle scenes have gritty songs playing, while the more lighthearted moments have a fluttery melody. The theme song “Hikari Sasuhou” (The Direction the Light Points) by BACK-ON, is a heavy metal ballad accompanied by some hip-hop elements that give it that gritty, in-your-face feel that projects the series in a violent light, as it should be. It’s ending theme “Naked Flower” by Romi Park, is a fantasy-influenced theme song with soft melodies and stringed instruments.

If its title doesn’t entice you from the beginning, then the story itself should be enough. Murder Princess has enough action, drama, violence, blood and even some comedy to draw anyone in and keep it. The only downside to the series is how short it is. It is one of those anime that could have gone on for a little while. But that’s the magic of these types of anime, as they hold you down and make you beg for more. Do you like your princesses violent, or would you rather they be more tame and graceful? Let us know down below.