[Editor’s note: The G.A.M.E.S. Vault is a new column that will feature games that might have flown under your radar. These will primarily be games that aren’t new enough to review, but still deserve the attention. So join us as we open the vault for the first time…]

Over the years, the gaming world has become replete with MMO titles. So many gamers lose themselves in these worlds, leaving their friends or lovers to utter the famous words, “stop playing that stupid (insert expletive) game.” Consequently, gamers must sift through a daunting number of titles to discover the good ones. Finding the right MMO can be a long, annoying process, filled with new characters that never make it past level ten. Well, allow me to alleviate your search and provide a suggestion:

Path of Exile  is an expansive MMO that gives players a dark and twisted story, a beautifully treacherous realm, loot-on-loot-on-loot, gameplay that is much akin to Diablo, and many more features to keep the player happy for a long time. Oh, and it’s free without falling into the traps and controversy that plague most free-to-play systems. PoE does free-to-play right as it never demands money from the player, nor does it give those who decide to spend an advantage. I have been playing for a couple months now, and not once have I felt like the game was trying to take my money. The game would rather you focus on having fun instead of basing the good times meter on monetary contributions. In doing so, Grinding Gear Games has created a truly great MMO experience that is more of an “ethical free-to-play,” allowing all players, whether you are a big spender or a gamer on a budget, to enjoy the world to its full capacity. But be warned, the realm is not for those who would sooner use words than their sword. Or mace. Or axe. Or wand. You get it.

Home to some of the foulest creatures this side of the Mississippi, each monster is more vile and dangerous than the last. The town slogan is, “Why the hell are you here?” There may have been a President, but he or she was probably subjected to a fate similar to those poor bastards in Congo. If you found this game on a dating website, its interests would be “flesh and whiskey,” and your first date would end up inside Jennifer’s Body. The number one export is despair, and the main import is you, exiled to a land where you will most likely find more blood than water, and just about everyone has a bone to pick with you. Whether your exile was product of corruption or you intentionally caused the murder of innocent civilians, there is one clear message: it’s your own damn fault. Suck it up and start becoming the badass you always knew you could be. Welcome to Wraeclast.

PoE is a fast-paced action RPG brimming with devastating weaponry and a variety of abilities to obliterate your opponents. Although this is not unique from other MMOs, PoE sets itself apart with its sprawling level of detail — especially for being a free-to-play — as well as relentless and seemingly infinite enemies, and the volume of updates GGG provides. The gameplay is almost immediately addictive, and it helps when there is a team of developers that are constantly creating more for their world to keep that level of addiction high and concerning. Grinding Gears Games really cares about its players. If a player begins to feel at ease in the world, there are a series of features so that the difficulty is revamped and the individual does not get bored, which is a side-effect I have personally become all too familiar with when playing MMOs. Too easy on normal? Why not up the difficult to Cruel? Oh, so you think you’re good because Cruel is a walk in the park? Why don’t ya up the difficulty to Merciless? Alright, calm down, we get that you’re good and that you can tear up every difficulty. Lucky for you, GGG solved that problem, too. Every so often, patch updates will install new leagues for PoE players that offer new challenges to complete and a new ‘economy’, as it is deemed, in the world.

There are always four active PvE leagues, the default Standard and Hardcore (if a player decides to play in the Hardcore league, once they die they are dropped down to standard), and two special leagues, one for each basic league type, that are only available for a limited time. The new patch update “Sacrifice of the Vaal” offers the new leagues (among many other features): Ambush and Invasion. The Ambush league includes new chances for treasure from chests called Strongboxes. These special chests, when opened, trigger a group of monsters that ambush the character and must be killed in order to acquire the contents of the chest. Depending on the chest, the monsters will be stronger and the rewards will be greater. The new hardcore league Invasion beefs up the difficulty even more. At any given time, monsters from different levels will invade your current area. Additionally, bosses from other areas may invade as well, bringing with them new abilities to keep things interesting. 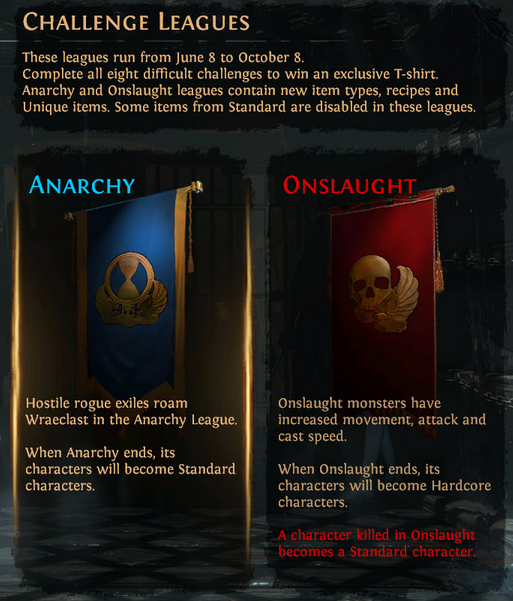 These special leagues are only a few of the features that PoE players love, and why they keep playing. With the new expansion, players battle Queen Atziri, a new boss designed for high-level characters that want a hell of a challenge. Before you even get to the Queen, you need to make your way through a series of other bosses, each one nearly as challenging as the Queen. These bosses reside in Vaal-influenced areas, denoted by “a glowing, beating heart and swirling ribbons of blood,” and drop new Vaal skill gems to pad your stats even more, or a Vaal fragment which are used for unlocking high level areas. Along with new bosses, gems, and areas, there are also new corrupted weapons, PvP modes, and more.

I know “Sacrifice of the Vaal” sounds like a Nordic metal band, but it promises new challenges and content to the already super fun MMO. Path of Exile stands out amongst the onslaught of MMOs available to gamers, and will continue to do so as Grinding Gear Games adds more major expansions and updates. If you’re looking for an alternative to other MMOs, something to occupy your time, a decent challenge, or something to finally end your MMO dry spell, you won’t be disappointed with PoE. Just don’t touch the walls, they’re covered in blood.