Let me tell you a story about why you should always stick to your gut and never allow yourself to be influenced by the opinions of others. No, I am not about to write the synopsis of a sports movie. When Rage came out in 2011, I was really excited: a semi-open world, Fallout-esque landscape, steampunk aesthetic, and made by one of my favorite developers, Id. Everything about it sounded awesome. Everyone (at least it seemed like everyone) had a problem with it when it was released. Every person I asked would say the same thing, “It starts off cool, but then gets really repetitive.” When I would go into my local video game spots, Rage was always on sale for roughly 8 bucks. My initial burst of excitement was always followed by a chorus of negative opinions. Well one day I said, “Fuck them, I want this game.” As the first sentence of this story blatantly points out, I enjoyed Rage to no end, and it was a shining example that I should always listen to myself and never to reviews. [Editor’s Note: Unless they’re from our site, of course. -DF]

Rage takes place in the year 2135, 106 years after the Earth was hit by an asteroid, throwing the world into a post-apocalyptic dust bowl. You play as the Ark Survivor, one of many put into pods underground as an effort to rebuild humanity. When the Survivor awakens, he finds that all the others in his pod are dead and heads to the surface, only to discover the world is one giant desert plagued by multiple factions of bandits and mutants. The Survivor sets out on a journey to discover why the others were dead, why the last remnants of the government are looking for him and the few other Ark Survivors, and the larger, more devious plot that connects it all. 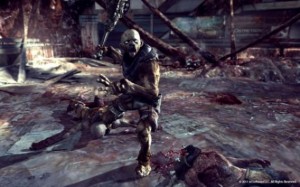 The game plays, looks and feels like an Id game, which should hook you right there if you’re a fan of Doom in the slightest. Constant action and ruthless weapon combinations are two phrases I would use to describe the gameplay in a nutshell. There are a variety of weapons to take into battle, but to keep things interesting, each weapon has various ammunition types. Why use a boring ol’ shotgun the regular way when you can load up on pop rockets and turn your shotgun into a grenade launcher? When you aren’t demolishing the competition with your slew of weaponry, you can also drive your own personal death machine. Some areas on the map almost demand you to drive (If you do decide to walk, feel free to bask in the worst idea you’ve ever had.) and while traveling the vast desert, you will run into factions of bandits–like the kind of awesome movie Doomsday–so you can upgrade your vehicle with your standard post-apocalyptic fashion line: rocket launchers, machine guns, sentries, etc.

All of the negative reviews, both by users and critics, have focused on the story being weak.  I personally thought the plot was original enough to keep me heavily invested until the end, with a variety of characters that were voiced well and kept the otherwise-grim reality of the world light-hearted. Whether or not you find the story weak or strong, there is enough gameplay to keep the player entertained, which is arguably more important: Are we having fun? The main story lasts about 15-18 hours; however, the abundance of side missions and mini games provides a sizable buff to the amount of enjoyment you can get out of the game, not to mention replay value. Talking to the lovely people in the towns grants you access to side missions to further explore the environments and dig further into the lore. In addition to side missions, you can also enter your vehicle into races to receive money and move up the rank in the racing leagues. The racing is a lot of fun, and one of the desert tracks is reminiscent of the pod racing scene in The Phantom Menace. Subsequently, races sometimes involve weapons so things are always spicy. If you were playing the game when it was released, I would mention that you could take your competitive spirit even further by competing in the multiplayer “Road Rage,” where you battle royale in an arena against three other players. Considering the game was released three years ago, I am not sure how active the multiplayer community currently is; you may be pleasantly surprised, though. To supplement the multiplayer options, Rage also offers nine co-op missions entitled “Wasteland Legends” that are fun and add interesting depth to the story. It’s always nice learning more about the lore. 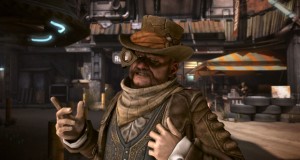 Rage is one of most criminally underrated games for the now last-gen consoles, and was one of my favorite games. It had a strong story, dynamic gameplay, fast and ruthless enemies, and was a subtle reminder that Id is still an amazing developer. The game came and went quickly in the public eye, to the point that it is difficult to realize that it was even there at all. Rage deserved more attention than it received, and unfortunately because of its lack of recognition, gamers missed out on a wonderful experience. But that’s the point of The G.A.M.E.S Vault — to point you toward some of the games you may have missed and the experiences that should be appreciated. When I bought the game a year ago it was $8.99, that is an incredibly reasonable price to pay, and it’s available for PS3, Xbox 360 and PC.  I know some of you are on a budget, but for nine dollars, and probably less now that it has been a year since that price, you will not regret your purchase.