When a video game offers choice within the story and the development of their character, the player is usually given two options: between good and bad. These choices lead to your character becoming either the hero, the villain, or the always debonair neutral mystery lady or man. For the most part, the player knows what they are getting into when they make a particular choice, which creates a sense of control over their character’s destiny. Yeah, well, meet Spec Ops: The Line: a linear game that offers no choices (save for the ending) and plummets you into a pit of grit and sorrow that forces you into lose-lose situations where tough decisions have to be made, regardless of the horrific cost. You, as a player, will question your moral compass as you slowly dip further into the innards of the human conscience and lose all perspective of right and wrong. In fact, the line between right and wrong is so blurry, you’re going to feel like you’re living a Deftones music video, and there is nothing you can do about it. After a cataclysmic event levels Dubai, Captain Martin Walker, the central protagonist of the game, receives a distress call and sets out on a mission to provide aid to possible survivors. Walker’s Delta Squad, made up of two other soldiers, Lugo and Adams, head into the heart of Dubai to investigate the signal. What they find, though, is far more than they ever expected, and needless to say, the three soldiers are in for a rough ride. 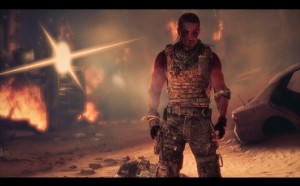 Before I continue, let me be perfectly clear: the fact that the game is linear does not make it a bad game. While linearity can detract from an experience and make the player feel like they’re simply going through the motions, without any weight to their choices, Spec Ops utilizes this mechanic to benefit the game. The linear quality is precisely why the game resonates so well. As mentioned above, there are no choices. That means in order for the game to continue, you must head down the path the creators developed for you, and for the game to proceed, you will be forced to do some very morally skewed things. What transpires throughout the campaign is not for the faint hearted. This is not a game you pick up and play on a whim, as it emphasizes the sheer degradation of human character experienced throughout the story, and the absolute disregard for your feelings. You may be able to play for “a little while”, however after you are done you may feel a strong urge to hug the nearest person to you.  Perhaps get into your pajamas and have a good cry. The linearity punctuates the emotional and mental weight particular decisions have on us when faced with no real “right” path. Subsequently, it highlights the necessity to make tough decisions, especially in the case of survival, as each second is lost forever and the danger rises. This direness is compounded by the game’s linearity. In order to complete the game, you have to keep moving forward, but by moving forward, you will be confronted with more and more scenarios that will end badly, because that is the nature of the beast. It’s war. .

I feel like I am not selling this game correctly and I hope what I have said about the campaign does not deter you. Instead, it should excite you. This is a game where the good guy is not headbutting every bad guy in the face, falling from ridiculous heights only to cough up blood and say “ouch”, or overflowing with manliness. It shows a real human with real feelings that reacts to things realistically, not like an egotistical man-robot. Playing through the campaign, yes, I felt as though my reputation as a decent human being was dropping rapidly, but I just could not put down the controller. Most war games have the protagonist jumping over or onto trains, kicking a terrorist into a plane turbine, or staring triumphantly at the horizon with a gun on his/her hip and a mountain of dead people behind them. It’s all very Hollywood. However, that is not, and will never be, an accurate depiction of what transpires during combat. The G.A.M.E.S. Vault is not meant to tackle social norms or the fallacies of entertainment and the “real” events it depicts, but I want to accentuate how The Line throws away the bullshit, so what remains is a stripped down and honest video game. I will also not say that The Line is a realistic portrayal of war, because nothing can be. I will say, however, that instead of glorifying the killing of nameless bad guys from a made up country, Spec Ops: The Line delves into the human psyche and the ugliness of what it takes to do the “right thing”. At the end of the day, the difference between right and wrong can be warped to whatever we need it to be, so that we can escape the horror of what reality really is. The Line confronts this theme (along with a myriad of other mature themes that could fill a 5,000 word academic essay) unapologetically, so that the player can at least have some sort of notion how difficult it can be to find the “right thing”.

Although the gameplay is typical of most third-person shooters, i.e. moving from cover to cover, slow-mo headshots, etc., the mechanics work well with the maturity of the game’s content. Every shootout is intense and relentless, and it helps that the A.I. are not complete morons. They will hunt you, surround you, and make things as claustrophobic as possible so that you will make a mistake. Luckily for you, the friendly A.I. are also rather smart and help out in a number of ways. Additionally, the environment provides aid whenever possible, such as dust storms and weak structures that collapse and cause mayhem. The intensity and varied combat situations keep things fresh and prevents the boredom that manifests from mindless shooters. Unfortunately, though, as far as multiplayer goes, it is mostly running and gunning, utilizing perks and other incentives that make it feel like any other online action game. In an interview, the director of the game said that the multiplayer was literally forced down the game’s throat by the publisher, who viewed it as a checkmark for things that “modern shooters have to have”. Regardless, this game is all about the single player campaign, and that alone should convince you to pick up the game. 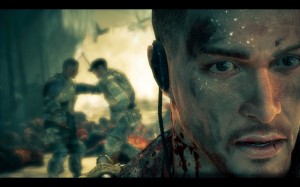 The vast majority of first and third-person shooters rely on big explosions and a burly male protagonist with a five o’clock shadow that just won’t quit. Well, this game has both of those things, but it subverts these classic tropes to create a far more emotional and thematically heavy journey than its other violence-heavy counterparts. Throughout the campaign, you will explore sections of human mentality you did not think existed. It is not a pretty game. Spec Ops: The Line was meant to be bold, jarring, visceral, vexing, and any other vicious words you can think of. When the end credits roll, and you’re in the fetal position, it will begin to dawn on you how great this game is and how it truly is an original and fresh shooter among all the other cookie cutter gun-a-thons out there.