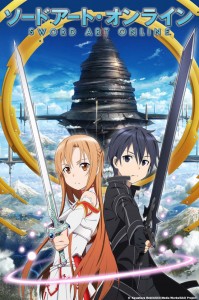 The Geekend is back, and while we’re all across the board, everyone’s having fun. Some of us are watching great anime, while others are revisiting games we love for nostalgia or completionism. What are you playing and watching this weekend?

Ebony Brown — Staff Writer
This weekend I turn the big 2-1! And while that does mean party time, my courses haven’t let up on the workload. But as I study Media Production, I am allowed to go into depth into many media products, and what else better than to plan my 3,000 word essay on the Pokémon franchise? I have to write about the theory and concepts of power, spectacle and memory and how they all tie into Pokémon. Sounds hard (and it is), but I’m really looking forward to starting it! Also, as it’s my birthday, I may have ‘persuaded’ my university’s Anime and Manga Society that on Friday, we will watch Sword Art Online. I’m president, and I have to get my way on my special day. There aren’t many complaints, though; a lot of the society enjoy SAO. Even better, some of the members are going to cosplay that day just for my birthday! I feel like a much-loved president right now.

Michael Riel — Staff Writer
Sadly, I have not been watching any anime this week. I know it’s a sin not to watch anything. However, that’s only because I have been doing my NanoWrimo and playing the just released WWE 2K14. When THQ went bankrupt and Take Two took over the license for WWE Games, I thought they would do a terrible job, but I’ve been proven wrong. The gameplay is crisper than it’s ever been, and there is a cadre of characters from the current WWE roster and the classic roster, as well. Overall, it’s a pretty good game, and I’m busy creating many characters so I can take out Hulk Hogan and other classic superstars, if you smell what I’m cooking.

Jimmy Stephenson — Staff Writer
I must confess, I’ve spent a large part of this week a bit obsessed. I’m still making progress with Guided Fate Paradox, but not as much as I should be. Instead I decided, for some reason, that I would put my foot down and finish off Dark Souls. As much as I love the game, I will admit that this mandated some tedium. One trophy in particular, Knight’s Honor, was the source of most of the frustration. While it’s description only mentions collecting “rare weapons”, what this means is that you have to find a very specific set of treasures hidden on corpses in the game. Additionally, players have to collect a set of weapons that drop off defeated enemies. Some of these drops are always guaranteed, while others were, as I found out, exceedingly rare. Not only that, players also have to cut off the tails of every applicable boss. This led to a very rage filled moment in which I accidentally killed a boss before cutting her tail (because, of course, the one boss that turns invisible is one that you need to be precise with). That was fine, though, since this achievement can’t be done in one playthrough anyway. The last requirement is to have all the weapons that are created with boss souls. Since one boss is used in three different weapons, this meant that I was on my New Game ++ when I finally received attained the Platinum Trophy. But, yeah; to make a long story short, I did it. Suck it, Lordran!

Jennifer Griffith — Managing Editor
I’ve loved Minecraft ever since I started playing back during the early days of the game, but I tend to play it in bursts. It’s been a while since I last did more than watch YouTube videos about Minecraft, though, so when a friend of mine from back home started up a multiplayer server and asked if I wanted to join in, I decided to give it a go. I haven’t had as much time to play as I’d like, but I am definitely having fun digging tunnels, refining minerals, farming, and building stuff. I’ve also been chipping away at Ace Attorney V; finally made it to case two, and it’s pretty ridiculous (in a good way). My Vita got some play time this week, too, when I picked up my copy of Flower. It’s free on the Vita if you already own it on PSN, so I figured, why not? The motion controls make more sense somehow on the Vita, so I think I might replay the whole game soon for a different experience. I’m still on a bit of an iPad game kick, as well, especially now that I’ve discovered a rhythm game called Cytus. It’s a popular app from Japan, and it has tons of great techno and pop songs to play, including a few Vocaloid tracks.