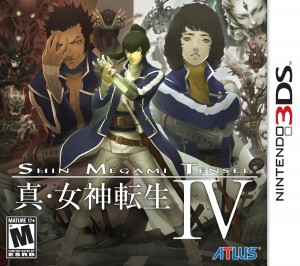 Welcome to The Geekend, our new weekly column where The G.A.M.E.S. Blog staff will let you know what we’re playing and watching right now, and what we’ll be checking out this weekend. But that’s not all this column is for: we want to know what you’re playing and watching, too! Tell us what’s catching your attention right now, and maybe we’ll be inspired to check out some games, shows and books that we might have missed otherwise. Our inaugural column seems to have one common thread running through it: Shin Megami Tensei, but there’s more than just SMT on our plate.

At the moment I’m playing through Shin Megami Tensei IV for the 3DS. It’s quite a challenge, but the improvements in user interface keep me from getting too frustrated. For anime, I’ve mainly been watching two shows: Attack On Titan, available on Crunchyroll, has a surprisingly dark and interesting story, with the seemingly invincible titans being appropriately terrifying. The animation is top-notch, which really help the action scenes to impress. On the lighter side, Hulu has been streaming The Devil is a Part-Timer!, a comedy about what happens when a stereotypical fantasy overlord escapes to modern Japan, but loses his magical powers at the same time. Unable to return home, he and his subordinates must take on day jobs in order to pay for the tiny, one-room apartment they’re living in. The concept is hilarious, and seeing standard role archetypes flipped around leads to some genuinely funny moments. I would definitely recommend them for any fan of anime.

I’ve been playing a lot of Shin Megami Tensei IV. First time playing a main-series SMT game, and if I’ve learned one thing, it’s save often. Still, it’s been really fun so far! As for anime, I’m caught up on the Red Data Girl simulcast from last season, and you can expect to see my review on that soon. I also saw Wolf Children at the JPOP Summit Film Festival in San Francisco, and that was amazing. Mamoru Hosoda is a fantastic director, on par with Hayao Miyazaki for sure.

Unfortunately, I’ve spent most of the last few weeks playing “survive a crash course on functional human neuroanatomy”, and with finals next week, this weekend will probably be more of the same (otherwise, I too would be playing SMT IV). So while I haven’t had time to delve deep into any games, I’ve managed to spare a little time here and there for the sake of my own sanity. I recently grabbed Persona 4: The Golden off of PSN for $20, and I’ve played a little here and there on my Vita. I really like the opening theme, but it feels so different than the original P4 theme that it’s kind of strange. The game itself is just as fun as the original, if not moreso thanks to all the little tweaks that were made. On the anime side, I’m going to dig into Hanasaku Iroha season two this weekend, so hopefully I can churn out that review for you to enjoy once I make it through finals. I reviewed season one a few months back, it’s a cute show with more of a mix of comedy and drama than I expected at first, and season 2 looks like more of the same.

While we on staff have our hands full dealing with our demons, let us know in the comments what you’re doing this geekend. And, if you’re an SMT fan, let us know what your favorite games, characters and creatures are, too!