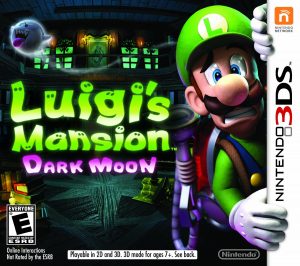 Welcome back to The Geekend, where we invite you to come chat with us about the games and anime you’re planning to fill your weekend with. The staff is watching a good bit of anime, playing around with character customization, and enjoying some new multiplayer sessions. One of us is even hitting the road for a convention this weekend!

Before we get started, though, you might remember that last week, our Editor-in-Chief, Dan, mentioned that he was going to review From Up on Poppy Hill. Well, not only did he review it, but The G.A.M.E.S. Blog is also having a giveaway! If you want your shot at a free copy of this Studio Ghibli film, head over to our contest page.

After that little detour, let’s jump right in with what the staff is into this week.

Michael Riel, Staff Writer
Over the last week, when it comes to video games I have been clocking hours on WWE 13 out of sheer creationism. Since you can customize every aspect of your wrestler, I’ve been going crazy on creating anything that comes to mind. Even made Billy Mays, Mr. Clean and Vince from the ShamWow commercial and had them duke it out. (The winner turned out to be Billy Mays.) As for anime, I’ve been watching a couple different shows. On Netflix, they have the original Digimon anime, so I’ve been revisiting my childhood in this way. I also discovered an anime that’s not dubbed in English yet, called A Dark Has Seven Lives. It revolves around a young boy named Taito, who was bitten by a vampire but lost all his memories of her. Years later, when he is in high school, he regains his memories, and they meet up. It turns out he was given a power where within a span of fifteen minutes he can die up to seven times. If he dies past the seventh time, then he stays dead. Taito starts battling other supernatural creatures that come out of a portal in his school, and that’s about where I’m at in the anime.

Jimmy Stephenson, Staff Writer
Anyone who has played a good number of JRPG’s will be familiar with the hump. Before you reach it, every step you take feels like a milestone, because you have to fight for it tooth and nail. Your characters are weak, underpowered, and lacking in options for dealing with threats. At some point in a game, though, you finally make it over, and things begin to move faster and faster as you head downhill. Enemies drop more experience, and your characters gain new and powerful abilities, which make you able to deal with the new challenges that pop up more and more quickly. About eight to ten hours back in Shin Megami Tensei IV, I made it over the hump. I still have a ways to go, but I no longer feel like I’m hitting a roadblock every hour or two. I’m still enjoying the game immensely, and it will remain the center of my attention until I’ve unraveled all of the mysteries the game offers. As far as anime goes, I haven’t had anything particularly interesting to report. However, I should be receiving a movie called Sword of the Stranger through Netflix tomorrow. It’s an samurai movie that stars a Clint Eastwood-esque nameless wanderer who comes to town and…well, you’ve probably heard that sort of plot a thousand times before. However, I’ve seen some clips of the action from this movie online, and they are awesome, so I have high hopes for it. I’ll let you all know how it goes next week.

Jennifer Griffith, Associate Editor
Last week, I mentioned that I’d started up Luigi’s Mansion: Dark Moon. I’ve since gotten far enough into that to unlock the multiplayer, and I have to say, it’s tougher than I was expecting it to be, at least with only two people. Climbing the ScareScraper and eliminating ghosties is good fun, though, so I can’t wait to test it out with a full party. Of course, I’m still chipping away at SMTIV and probably will be for some time now. I don’t have anything new to report in the anime world, but I did pick up the first two manga volumes of The Sacred Blacksmith, so I’ll be reading that over the next week. This weekend, though, I’m heading down to Santa Clara, CA, for Japan Expo, so if you see someone carrying a bag with our site logo and a big ol’ plushie of Teddie from Persona 4, that’s probably me. Feel free to come say hello! I’ll be dressed up as Naoto in one of her non-standard outfits from Persona 4: Golden, and I’ll be attempting to snag autographs from some Ace Attorney folks (the composer and art director).