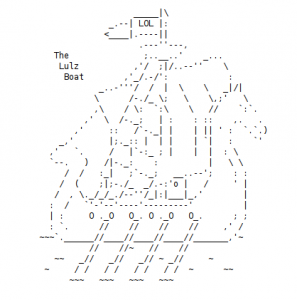 By now you might have heard about Lulz Security. They are a hacker group that has been responsible for taking down many big name websites and making them inaccessible, or stealing data from them such as login and password databases. Well this week they’ve hit Senate.gov, Bethesda Softworks, Pron.com, and they just posted a text file with 62,000 random logins from Gmail, Yahoo, Twitter, Paypal, Facebook, World of Warcraft and Xbox Live. They don’t identify which website each login came from but you will want to check the list to see if your info is on it.  It also wouldn’t hurt to update the passwords on any websites that you use.

If on the other hand, you find what they are doing to be funny they are currently taking requests on their twitter feed for which sites to hit next.

Now why would they do this? They claim it’s to force security to the front page of peoples minds.

Do you think every hacker announces everything they’ve hacked? We certainly haven’t, and we’re damn sure others are playing the silent game. Do you feel safe with your Facebook accounts, your Google Mail accounts, your Skype accounts? What makes you think a hacker isn’t silently sitting inside all of these right now, sniping out individual people, or perhaps selling them off? You are a peon to these people. A toy. A string of characters with a value.

This is what you should be fearful of, not us releasing things publicly, but the fact that someone hasn’t released something publicly. We’re sitting on 200,000 Brink users right now that we never gave out. It might make you feel safe knowing we told you, so that Brink users may change their passwords. What if we hadn’t told you? No one would be aware of this theft, and we’d have a fresh 200,000 peons to abuse, completely unaware of a breach.

I’m not an advocate for their actions but they are right.  All these database releases have opened my eyes to password security.  How about you?  Will all these hacks change your habits?  Still going to use the same password for every site?