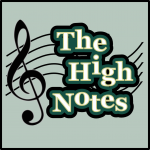 Hey, everyone! It’s Dan, filling in for Jennifer again, as she’s still settling in at her new home. This week, I’ll take you through a whirlwind tour of some music from Ar Tonelico trilogy. While the Ar Tonelico series is known for some weird game concepts interspersed with its sexual innuendos, I promise this article won’t be quite as weird as the last time I was left in charge.

For those unfamiliar with the trilogy, the Ar Tonelico series was developed by Gust, who also make the Atelier games, and published in North America by NIS America. The three games take place across a roughly 4-5 year span in the world of Ar Ciel. In this world, a special group of women known as Reyvateils have the ability to create song magic through their hymns. This magic takes many forms as it shapes the world of Ar Ciel, from actually creating lands to helping defeat enemies in battle.

In this week’s edition of The High Notes, we’ll explore some of my favorite tracks from across Ar Ciel. Gust called upon Atelier composers Ken Nakagawa, Akiko Shikata, Akira Tsuchiya and Daisuke Achiwa, with some additional help here and there to write the music and lyrics for these games. While there are times you can hear the similarities between the soundtracks of the two series, what I love most about the Ar Tonelico tunes are that they have their own style. The mixture of synthesized, electronic instrumentals and religious hymn-like vocals makes for a unique and enjoyable sound. See for yourself as I take you through five of my personal favorites from the series.

It only makes sense to start off with an opening, and all three games technically share different variants of the same one, “Singing Hill”, but my personal favorite is the second one, which you can see below. While the first version is very clean and harmonious, the second version introduces more counter-melodies and complexity that really grabs your attention and creates a different, almost mystical feel from the original. The third version, while also quite good almost becomes too busy at times. The best way to compare them all is to check out this video which puts all three in one.

What would a music list from an RPG series be without at least one battle tune? This one plays during a specific sequence in the game that is very much a spoiler. So while I can’t set the entire stage, I can at least tell you that Misha, the Reyvateil who sings it isn’t happy about what is occurring, and her emotions bleed through quite clearly in this song. While the overall style is similar to the other hymns, this one has a bit of an edge to it, and it fits the mood of the scene and battle quite well.

One thing that most RPGs eschew are the daily facts of life, but in Ar Tonelico II, bathing is actually a game mechanic. “Dualstalling” by putting your Reyvateils in the bath together can both boost their abilities and unlock conversations between them about a variety of topics. This song, “Secret Talk at Midnight” is the track that plays in the background throughout the process and the lighthearted and chipper tune is in direct contrast to the hymns that you hear in a number of other areas of the game. Admittedly, it’s also rather amusing to hear how the series loves to spell out its title in this and a few other tracks.

This one plays when you are at your camp or inn and take some time to chat with Saki before bed. By definition, this song’s title means to talk in one’s sleep; I don’t know how many people make cat noises in their sleep like this song has, but if anyone did in Ar Tonelico Qoga, it is probably Saki. I really like the mix of music-box-style sound as well as the melodic progression of the “nyaa”s, even though the sound itself is a little odd. Rekka Katakiri, who sang “why or why not”, the ending theme to Higurashi: When They Cry, changes speeds a little by providing the… vocals on this one.

We will close this edition of The High Notes with the final hymn from the original Ar Tonelico. In this one, all three Reyvateils come together to sing the last Hymnos in the game, a prayer for everlasting peace. The song starts with each briefly taking turns singing solo before coming together for the true hymn. And as one commenter on the video suggests, keep an ear out for the note that one of the singers hits near 6:19, it’s pretty impressive. Also, props to the video’s creator and whoever helped pull together the translations of both the Japanese and Hymnos and putting them in.

For those who have played the series, did I miss your favorite? For those new to these tracks, what did you think? And if there’s a game series you feel like we’ve been neglecting, let us know in the comments!