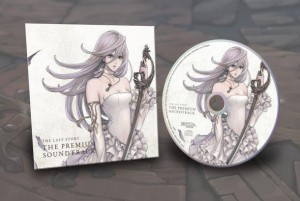 Do you remember when we reported on the limited edition of The Last Story back in June? At the time, the only pre-order bonuses revealed were a special box and an artbook. There was no mention of including a soundtrack CD like the one that came with the European collector’s edition, so we assumed it wasn’t happening.

Well, for once, it’s great to be proven wrong. It turns out that XSEED was just holding out on us in the information department because recently, they announced that a soundtrack CD will, in fact, ship with initial launch copies purchased through select retailers. If you pre-order the game through Amazon.com, EB Games Canada, or GameStop, you’ll receive the disc, which contains seven songs from the soundtrack composed by Nobuo Uematsu. Check out an image of the CD at the right, courtesy of XSEED’s Facebook page.

In addition to the soundtrack announcement, The Last Story also finally got a solid release date. JRPG fans will be able to to pick up the game on August 14th. Most of the placeholder release dates out there had it set for sometime this month, so if you were hoping to play it earlier, you’ll just have to wait a little bit longer. Meanwhile, you can check out some screenshots and a trailer for the game here.

Are you looking forward to playing this upcoming Wii JRPG? Let us know in the comments!