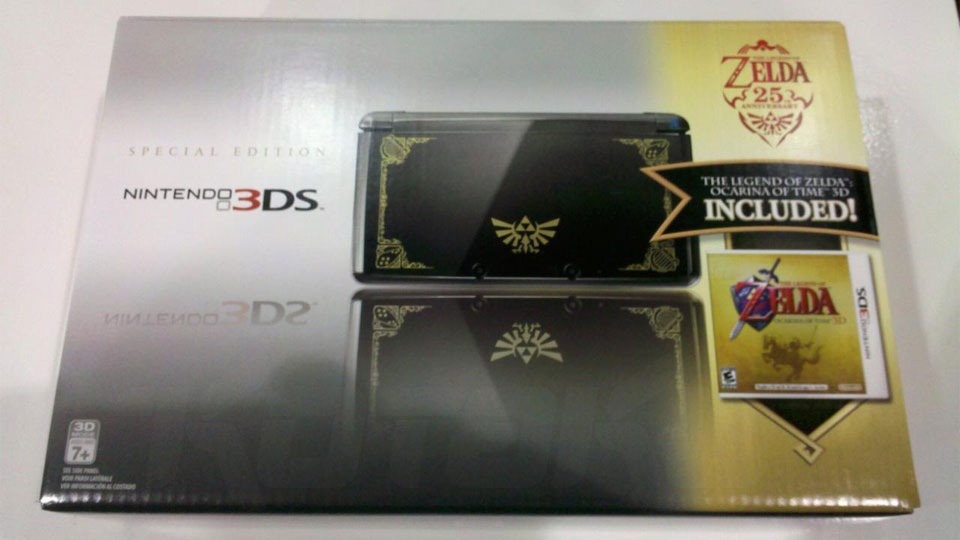 Two big 3DS news items out today.  First up the Special Zelda Themed 3DS bundle that was announced for Europe last week has been confirmed for US release. The confirmation comes in the form of a leaked Best Buy Black Friday circular.  (it’s towards the bottom of the list. )

The system will retail for $179.99, which is $10 more than a unbundled 3DS, but is still $30 cheaper than buying Ocarina of Time separately.   I see Gamestop’s ad shows they will be selling the system, so that should mean it will be available everywhere. (Edited:  Added Gamestop Ad Reference)

Second, in an Interview with AOL Games, Reggie Fils-Aime has confirmed that among the other announced updates the next system update will give companies the ability to sell DLC for physical as well as download only games.

In terms of what the next system update will allow, it will allow developers to sell add-on content, and whether that’s for a physical game or a digitally released game. In terms of how it will work, it’s up to the developer whether they want to make it to buy new levels, new items–all of that is up to their imagination. Essentially, what we’re doing is creating the framework for those transactions to happen.

Now the part of that interview that really caught my eye was when they asked Reggie if Nintendo will be making DLC for its games.

We’re interested in it to the extent that it makes sense to the consumer. And it’s interesting: I’ve had this conversation with a number of our key developers, and their mentality is, “Reggie, when we sell a game, we want the consumer to feel that they’ve had a complete experience.” Now, in addition, if we want to make other things available, great, and we’ll look at that. But what we’re unwilling to sell a piece of a game upfront and, if you will, force a consumer to buy more later. That’s what they don’t want to do, and I completely agree. I think the consumer wants to get, for their money, a complete experience, and then we have opportunities to provide more on top of that.

It is very refreshing to hear that.  I personally feel most DLC is a rip off.  DLC is not the same as an expansion pack.  Remember when you used to get those on PC games?  They may have cost $20-30 but they contained so much stuff that it would feel like you got your money’s worth and it never felt like the developer had been holding things back to make a few extra bucks. This was especially true on RPG’s.  When I bought the expansions for ES: Morrowind I got another 40hrs of play for each one.   But that is not how I see DLC today.  The content always feels like the developer made a complete game, then broke small parts of it off to sell to you for an extra $10.

I hope Nintendo sticks to that philosophy of providing the whole game at purchase, and not a crippled game that I have to spend more money on to complete.