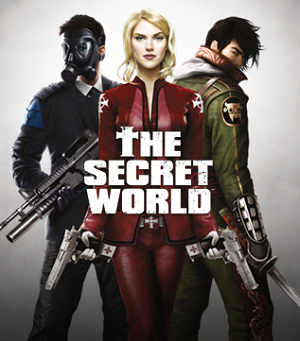 Week one of Funcom’s The Secret World is over, and now begins the detailing of my progress through the modern, fantastical world. To begin, I am really enjoying the game; it makes me feel like I did when I first started playing MMOs: amazed and excited to see the next zone, to get the next skill, and to fight the next monster. I find the world intriguing and the lore interesting to delve deeper into. The last game that involved me to this extent was City of Heroes back in 2004, and it is nice to finally have a contender with that title.

Starting up the game, I am instantly given a choice: what faction do I want to join upon going into The Secret World. There are three available, the Illuminati, Templars, and Dragon, and each have their own stake in the world. I chose the Illuminati for their suave business-casual attitude and their knack for subtle yet effective coercion. From here I go on about designing my character, all standard fare for MMO veterans. Then without a single attempt at letting me pick a character class, the game begins. So, up until now they have held their word with the “no levels, no classes” theme that Funcom has been pioneering with this title.

The introduction video gives me an idea about what has been going on in this universe: my character has gained “powers” through some unspecified means. After testing them out, quite destructively I might add, in his apartment, I am met with a man at my door. He describes this aloof shadow organization that is interested in me because of said powers and adds I have an appointment in Brooklyn. So, here I finally get control of my character, Stranger-Man, for anyone who would like to group up to play. Controls are comfortable for anyone used to MMOs, and I am easily strolling through some side street looking for my first objective. After a tutorial quest from some nut in a laundromat, I find myself in a labyrinth underground (A detail that is given throughout the game is that the Illuminati love labyrinths). I find their base’s entrance and am knocked unconscious; cue another video, quite funny and interesting, and then straight into my first bit of combat.

So, at this point my character is having a trippy vision about being in Tokyo while “filth” is destroying the city. This “filth” is a black ooze that infects its victims and turns them into raving mad zombies. I am introduced to three NPCs who tell me to grab a shotgun and start blasting away; I gladly comply. The following mission has me killing zombies in a modern subway which then breaks away into a crazy view of space and the planets; this is all a hallucination. This dream finally ends with my character blacking out after the space scene and coming back to in the Illuminati headquarters.

Thus far there has been a little combat and dialogue, but now I am given the chance to choose my first ability. Every weapon and magic is laid out in plain view with dummy enemies all around to test them on. There is quite a selection: three guns, three melee weapons, and three magics. I pick duel pistols and head to my first quest giver. After a short video describing a little more about the Illuminati and learning that the majority of the characters in this game are absolutely nuts, I am told that a little town in the northeast has a bit of an undead problem and that I need to find out what has happened. I again comply and head off to the hub world known as Agartha, basically a sprawling network of doorways into other zones. My destination is Kingsmouth, an allusion to H.P. Lovecraft’s Innsmouth.

Kingsmouth is in a bit of trouble, what once was a town that could be considered a new locale for the Deadliest Catch, now has their entire fleet of fishermen going undead. On top of that crazy lobster monsters and squid beings are springing up all over the place to kill whoever is left. This level screams Call of Cthulhu and is proud of it. This little New England fishing city has many little charming details that helps bring this interesting story to life. The Secret World made me think of this less as a game but more as something larger; I was a part of this world where fairy tales and horror stories have come true. Funcom has far exceeded my expectation in making me enjoy the world they created.

The questing, however, is not all too innovative. There are the standard fetch quests and kill “X” of enemy “Y”, but the world stays invigorating. What I found the most interesting was a new type of quest that requires investigative instincts, and research both in and out of the game using the in-game browser. As I peel back layers of the game new hidden secrets are revealed giving me an even deeper look into The Secret World. Learning about the Illuminati’s ties to Kingsmouth and the backstory to why this evil is plaguing the town gives me the back story in something other than exposition. It is a nice change of pace that few games even remotely attempt.

At this point, killing enemies is happening all too frequently and I have a better selection of abilities to choose from. Combat is not too different from most other MMOs in that you select a skill, click, and attack. There are other small action tweaks that make fighting more interesting and not a total grind. This comes in the form of things such as shotguns acting like their real-world counterparts: tearing up everything in an arc in front of the shooter or car alarms going off attracting more foes. But, The Secret World mixes things up with the no level, no class system. I chose pistols originally, but at any time, I can add ability points, used to buy attacks and buffs, or skill points, used to increase health, attack effectiveness, etc. to any other set of weapons. So, I decided to rack some points in Chaos Focus, kung fu with magic, which gives me some more moves to be a nice crowd-control character. This versatility will allow players to never be hindered by any aspect of this game and offers so many interesting builds. The one way players are limited is that only two types of weapons can be carried at any time.

Well, one week down and I would have to say I am truly enjoying The Secret World. It is not too different from the regular MMO fare but different enough that it is making me feel reinvigorated with the genre, something I desperately needed. I will continue to dive deeper into this game, so look for the second update followed closely by a review soon.