Developer Telltale Games, of the Jurassic Park Game and the recent and more successful Back to The Future Games, have finally unveiled a release trailer for their upcoming The Walking Dead game. The game is set in the universe of the comics, and despite having no obvious resemblance with the hit TV show in terms of the story or events, fans will find characters and locations that they are sure to find familiar. 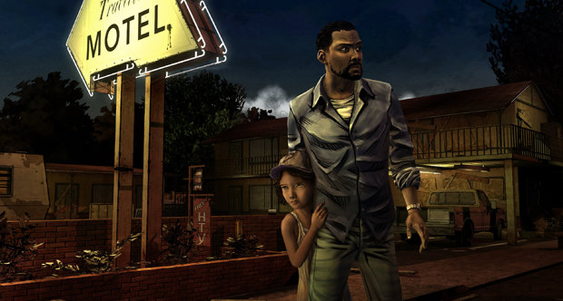 The game is set during the period of initial infection, just around when Rick Grimes is in a coma in the hospital. Gary Whitta, writer and story consultant of The Walking Dead game, shed some light on the game’s protagonist in an interview with IGN, saying that “The game’s main character is called Lee (Lee Everett being his full name). He is totally opposite to Rick. While Rick is a Sheriff, Lee is on the opposite side of the law. In fact he has been convicted for murdering his wife, and he is on his way to the prison when the infection hits and he finds himself awakening to a bloody world infected with Walkers”.

As can be seen from the gameplay video below, the game follows a style that Telltale has introduced us to in their previous games, with the ability to walk freely in the environment but a heavy emphasis being placed on instant choices as well as finding interactive items in a cutscene, much like a Quick Time Event. On being asked about the kind of choices players will be faced with, Whitta mentioned that players will be making “agonizing choices” and face some “bleak, sick stuff” in the game. He also mentioned that there will be a heavier emphasis on the story than their previous titles.

The Walking Dead game is to be released in an episodic form, 5 in total, just like an actual TV show with episodes ending on a dramatic note keeping the players excited for the next episode to come out. The game will be available as a downloadable title on PC, Mac, XBox Live Arcade, and the Playstation Network sometime in April 2012. It has been confirmed that the episodes will be available for an individual price of  $5 each, totaling up a sum of $25 for the entire game. PC and Mac players also have a very attractive offer to get them even more pumped up. Those who pre order the game ahead of its April 2012 release date will get a chance to feature in the game as a character. Telltale confirms it by saying that if you are a randomly selected winner their “artists will model you in-game as a human who will die a horrible death, returning as a ravenous walker.” In addition, up to four other contest winners will be modeled as zombies, giving you an opportunity to beat your walker self to a pulp. How cool is that!? To top it all off, ordering now will also give you 10% off its $25 price.

So what do you have to say? Are you excited? Can’t wait to see yourself die a horrible death, or hack zombie-you to pieces, or simply enjoy the game and its story? I for one can’t wait to play this game. Leave your comments below.