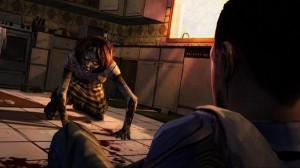 The Walking Dead continues to prove that no matter how oversaturated the market for zombies is, fans will continue to flock if they’re given an original and unique zombie product. Having already dominated both the comics and television industry, it looks like The Walking Dead has found another tasty medium to devour like human flesh: video games.

Giant Bomb reports that Telltale has sold one million episodes of The Walking Dead. It’s unclear whether this also includes those who have bought the season pass—which includes the unreleased episodes as well. Regardless, this is marvelous news for Telltale, as it is now their fastest selling game of all time.

I checked out the first episode a few weeks ago and absolutely loved it. Telltale is writing a smart, gripping story that embraces The Walking Dead’s moral ambiguity and less-than-sunny tone. The second episode, Starved for Help, is due out in a few weeks, and I can’t wait to see where Telltale takes things next.