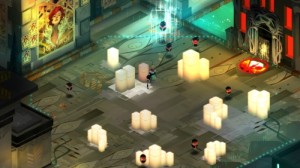 In an interview with Rock, Paper, Shotgun, creative director Greg Kasavin shed a little light on some plans for the upcoming title Transistor, mainly regarding a (kind of, sort of) multiplayer for the game. As a basis for comparison, consider it similar in ways to that of Dark Souls, where a player could rewatch other players’ past deaths or read messages left by them. Kasavin clarified: “You can still have your personal experience around the story, but you always know you belong in a larger [world]. For example, players can sometimes see traces of other players’ paths moving around. Things of that nature. What’s interesting to us about this world is that it lends itself to some interesting things like that.”

Multiplayer would have been great in Bastion, but Kasavin claimed that it was left out for a reason. In the article, he states: “We actually prototyped co-op in Bastion, and we cut it because [it just didn’t fit],” he admitted. “Traditionally, we agree that co-op is probably the most enjoyable way to play action-RPGs – with 1-3 other people. But we found it to be quite at odds with our narrative goals. When we had three people running around in Bastion, they just started goofing off and messing up the narration.”

Looking at the gameplay in the preview, do you think Transistor would benefit from a true multiplayer option?