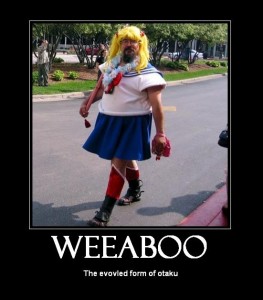 Every fandom has their dark sides, from Twilight fans and their aptly named “Twihards” to the grown men and women known as Bronies and Pegasisters who worship My Little Pony: Friendship is Magic. From the average person’s point of view, they are just a singular, strange bunch within a group, but if you dive into these fandoms, you realize that there are usually two groups of people. Those who are huge fans but don’t let it overtake their lives, and those who become so obsessed with it that their whole reality becomes based on it. The anime fandom is no different. Excluding the casual watchers, there are otaku and weeaboo. Otaku is a slang term from Japan, that labels anyone who is obsessed with and collects anything from a certain fandom. There are anime otaku, sports otaku, and even gun otaku. In America and other parts of the world, it has been used to describe anyone who is obsessed with anime, manga and by extension video games; a weeaboo is also considered an otaku, but taken to an extreme.

What Exactly Is a Weeaboo?

A weeaboo is someone who takes the subjects of anime, manga and the Japanese culture and allows them to take direct control of their life. Their whole world becomes so engrossed in these things, that they allow no room for anything else. It’s as if they take on this romanticized identity that has them embracing another culture for all the wrong reasons.  Now some of you may be thinking, “But aren’t you describing otaku?” While they both share some of the same qualities there are three major distinctions that separate true otaku from a weeaboo: 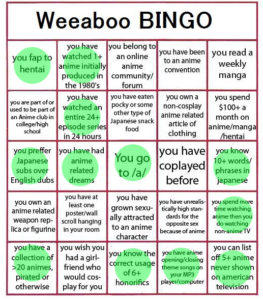 1. If It’s Japanese, It’s Automatically Better Than Everything Else.

To a weeaboo, everything from Japan is just the best. From cartoons to food to way of life, they imagine Japan as more of a celebrity than a country. They want to visit or live in Japan, but mostly because they have this false idealism. One that makes them believe that if they were to go to Japan, they would be welcome with open arms, because of their love for everything Japan. To them, if it doesn’t come from Japan then it is automatically second best. They are the type to eat only Japanese food, watch only media from Japan, and will shoot down anything that isn’t Japanese or Japan-related.

There are those out there who want to learn the Japanese language to further their knowledge of world languages, and then there are the weeaboos whose most formal education with the Japanese language comes from anime. They try to code switch–sprinkling random Japanese words throughout their sentences–which confuses English speakers and normal anime fans alike. Tell me if you have heard anyone use these words or phrases: “Your dog is so kawaii,” “Jennifer, you’re such a baka,” “Domo arigato, Mr. Roboto.” The first two are common weeaboo words, kawaii meaning something is cute and baka which means idiot. What weeaboos like to do is use different words that they hear in anime as if they were everyday language. Many times, they have no intention to learn the Japanese language as a whole. As for the last phrase, besides being a song title, it actually provides us with a movie reference which illustrates this argument: In Austin Powers: Goldmember, Austin and Foxy Cleopatra are speaking with a Japanese man named Mr. Roboto. During the conversation Austin cracks out “Domo Arigato, Mr. Roboto,” (“Thank you very much Mr. Robot”) only to get a strange look from the man. This is the sort of reaction that you could expect from normal people and anime fans alike when you are using certain Japanese words for no reason other than to look smart.

A weeaboo’s whole life revolves around anime and manga (and sometimes Japanese music, especially anime soundtracks). Not only will they talk non-stop about about their favorite characters and shows to anyone and everyone, but if you disagree with one of their opinions they will not let you live it down. They will continue to defend their shows often irrationally, some going so far that unless you agree with their opinions, you will not be friends. They are also the types to cosplay all the time. For most anime fans, we cosplay at conventions, during Halloween, at the occasional costume party and other appropriate places, but weeaboos (if they cosplay at all) are the type to go out and where their costumes in public as if it’s normal, and would still expect people to know exactly who they are.

Although a running Internet joke to most, there are weeaboo out there who literally date their favorite fictional characters. They are seen out in public or pictures taken at home with a body pillow with a character on it or a game screen from a dating sim of some sort, and the person acts as if they are in a relationship with the character. You may have heard the term “waifu” to describe this situation. While the common belief that is that only men have waifu, women are known to have “husbando” of their own. 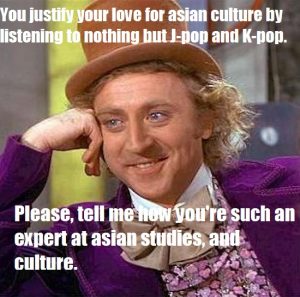 Now this whole article may seem like it’s just bashing weeaboos and that is not my intention. As with Otaku in Japan, weeaboos here in North America are given such a negative spin that people look down on them. Normally, they are just misunderstood and looking for a place to fit in–something we have all done, and I’m pretty sure that we annoyed quite a few people trying to fit in and be accepted. The funny thing is that a lot of hardcore anime nerds were once weeaboos themselves and to this day still show some weeaboo qualities from time to time. As anime fans, they sometimes get a little overexcited about the new anime and it’s not hard to see why. I mean have you seen Attack on Titan? It’s like being giddy for new Harry Potter or Twilight movies. The important thing is to try and find a balance between your fandom and your life. It’s okay to fanboy/girl over your favorite anime, in the right situations (e.g., conventions or with your other anime fan friends). It’s okay to want to speak Japanese, but learn how to speak it and write it correctly that way you not only learn a new language but you can truly impress people by knowing it.

So in the end, it’s not about labeling people names and trying to stay away from them, it’s about knowing the difference and trying to help people find the balance so they can live life and make friends. Were you once a weeaboo? What sort of weaboo qualities do you still have? Let us know in the comments below.