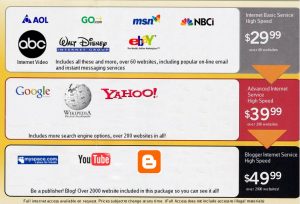 Demon, a UK ISP, has announced a broadband package that prioritizes the traffic of gamers. Called the Game Pro package, it will prioritize the data traveling to and from the Gamers connection. Essentially they are installing Business grade connections in a residential setting. Good news for those who want to pay the extra fee. Bad news for Net Neutrality advocates. How you may ask?

Demon also has peering connections set up with gaming companies, so it can offer an even faster network for playing or downloading.

Such benefits don’t just appeal to gaming aficiandos, Warner admitted, saying the deal would be useful for any multimedia streaming. “I guess you could call it more a multimedia broadband connection.”

That. They are not just giving a business class connection (guaranteed up time and dedicated lines, etc..) they are giving extra speed based on destination. This is exactly what NN advocates have been warning people about. The companies who can afford to set up the peering agreement will get a competitive advantage over companies that can’t afford to pay for the toll road to their customers.

It’s a slippery slope people. Today WoW traffic gets priority. Tomorrow Fox loads faster then NPR or CNN. Then Blogger and WordPress don’t load at all because Microsoft bought all the bandwidth so only Windows Live Journal will load.

Am I overreacting or is this just another stepping stone to the death of the internet as we know it?