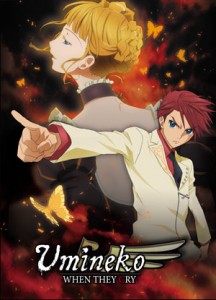 NIS America recently announced plans to release a premium edition for both volumes of Umineko WHEN THEY CRY. Both volume one and volume two will come with hardcover artbooks containing character sketches and bios along with a complete episode guide. As far as on-disc extras go, volume two will feature a clean opening and ending for your viewing pleasure.

Umineko WHEN THEY CRY is a psychological thriller that tells the story of the Ushiromiya family. They come together on a private island to decide how to distribute the family patriarch’s estate once he passes away, but they become trapped there when a typhoon hits. As they wait out the storm, a series of bizarre murders begins to take the lives of family members one by one. The only person on the island who doesn’t think anything supernatural is going on decides to investigate and uncover the true killer. When he finds himself face-to-face with a supposed witch, he must fight to the death to discover the truth. This series is based on a dojin mystery game of the same name from 07th Expansion, which is the same group whose games inspired the anime Higurashi WHEN THEY CRY.

You’ll be able to pick up both volumes on December 4, 2012. The first, which contains the first eighteen episodes, is priced at $79.99, while the second contains the last eight episodes and costs $49.99. Both premium editions come in Blu-ray format, and as with all NIS America releases, the only language option is Japanese audio with English subtitles.