Yesterday, Valve Software announced a new feature of their popular games distribution service: Steam Family Sharing. The feature allows for a Steam user to choose a select list of other users (up to 10) to ‘share’ his or her Steam library with. That means that if, for instance, you own a copy of Payday 2, you can choose to share your library with another person, such as your online friend. Then your friend could log in with their account and download and play your copy of Payday 2 while generating their own saves, which will not interfere with yours. Valve’s website describing the feature also indicates that you cannot simultaneously use your library while another user is playing one of your games; if you start up Kerbal Space Program, your friend will be prompted to either purchase Payday 2 or exit the game. Many of the mechanics of the system are still unclear, such as if you can access another user’s shared library while they simultaneously use yours. The feature will roll out to a limited set of beta members in mid-September, then eventually to all Steam users. 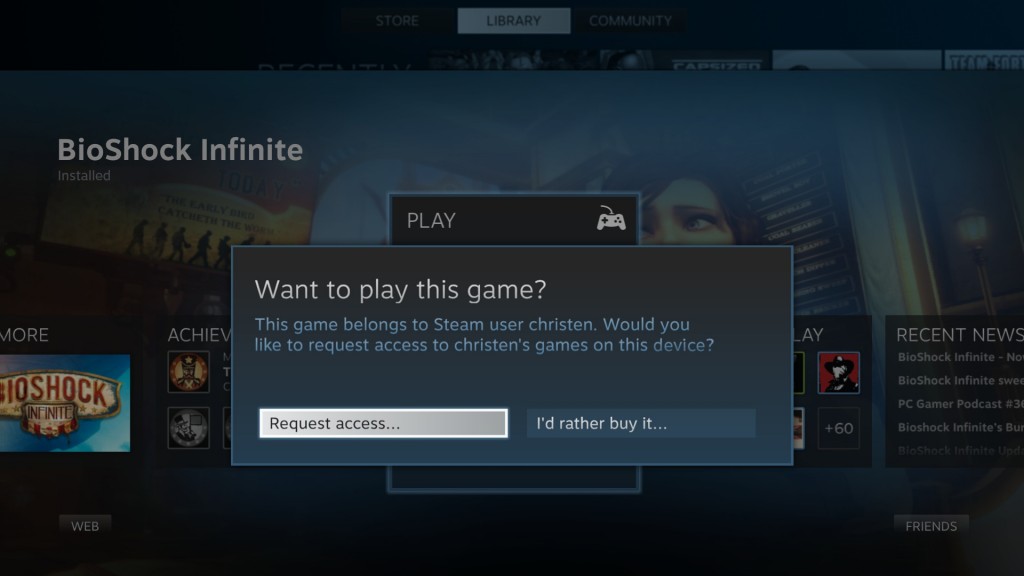 Steam has arguably set the standard for digitally distributed games over the past few years. Valve’s renowned sales, reliable software, and customer service have left an impression on the minds of many gamers. As Sony, Nintendo, and Microsoft now seem to be moving in the direction of prioritizing digitally downloading games over purchasing them on disc, there remains a great deal of questions as to how consumer’s rights to titles they have purchased will be managed. One of the potential problems with these games is the lack of an ability to loan or resell these titles to other users (or to used game shops). Earlier this year, Microsoft’s extremely internet-oriented DRM plans for the Xbox One featured an answer to this question, with a similar game sharing feature to Valve’s. After the removal of the always-online DRM requirement though, the digital game sharing features seemed to disappear. Now that Valve seems to be once again attempting to  establish a precedent for digitally-purchased games, it remains to be seen how, and if, console manufacturers will choose to respond.