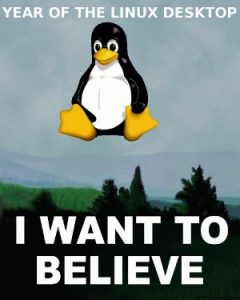 In an interview with gamesindustry.biz, Doug Lombardi (marketing VP), was asked directly about a steam client for Linux.

Q: Final question, and one I’m sure you’re not super-keen to answer, but I promised one of our tech guys I’d ask it. What truth is there to rumours that you’re also working on a Linux version of Steam?

This contradicts a report from the Telegraph that they had spoken to representatives of Valve who said they were working on a Linux client. I am hoping the marketing and programming departments have simply not been talking to each other.

In the same interview Lombardi lamented that Half Life 2 was such a success that all their games are now expected to chase that standard.

Doug Lombardi: Well, it’s forever going to be competing with Half-Life 2. Everything that we do competes with Half-Life 2. That was a huge, huge launch. It was six million or something in the first year, so we’re always chasing that one.

The full interview can be found here.