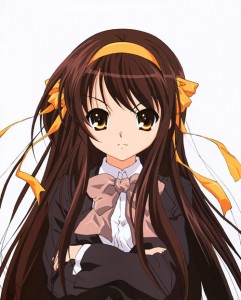 If you’re still a fan of the Suzumiya Haruhi series after the Endless Eight debacle, we’ve got a reward for sticking through it. An English-subbed trailer for the movie adaptation of The Vanishment (or Disappearance) of Haruhi Suzumiya was released today on YouTube. According to the video, it will be shown in theaters throughout Japan starting February 6, 2010.

The story of Vanishment takes place about one month after the cultural festival, during the week before Christmas. The SOS Brigade plans to have a nabe (hot pot) party for Christmas. But a simple party is not in the cards for Kyon and company, and Kyon’s only clue to solving the problem lies in a bookmark.

No word on how long it will take to bring the long awaited film stateside. For now, we can at least enjoy the trailer with English subtitles.