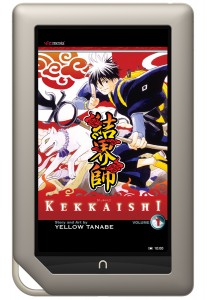 Yesterday, VIZ Media joined with Barnes & Noble to add digital manga to the NOOK store. Starting now, series such as Cross Game, Dengeki Daisy and Kekkaishi are available for download at prices ranging between $4.99 and $9.99 each. You can see the full list of available manga in the press release below. Unfortunately, the current release list doesn’t include some of VIZ’s most popular titles such as Bleach, Naruto or Vampire Knight, but it would not be surrpising to see these in the future.

VIZ is not the first company to release their manga on the NOOK. Yen Press currently digitally publishes titles such as The Melancholy of Haruhi Suzumiya, Highschool of the Dead, and Jack Frost for Barnes & Noble’s e-reader devices. To see what manga are currently available, head over to the NOOK online store.

New York, New York – December 20, 2011 – Barnes & Noble, Inc. (NYSE: BKS), the leading retailer of digital media and educational products, today announced that it has teamed up with VIZ Media, LLC, the largest distributor and publisher of anime and manga in North America, to bring the digital manga (graphic novel) experience to NOOK Tablet and NOOK Color customers. Debuting in the NOOK Store™ today, VIZ Media’s collection includes 18 series, featuring 107 volumes, from its popular Shojo Beat, Shonen Sunday and VIZ Signature imprints. Volumes are available for purchase and fast download in the U.S. and Canada for $4.99 – $9.99 (U.S. / CAN) each. New digital manga volumes, including previews, will be available weekly.

Viewing manga on NOOK Tablet and NOOK Color is authentic thanks to Barnes & Noble’s newly implemented technology that formats manga in its original right-to-left reading order. Read your favorite graphic novels on the award-winning NOOK 7-inch devices, which feature a full-color VividView™ touchscreen. NOOK Tablet and NOOK Color also give you access to the world’s largest digital bookstore, popular movies, TV shows, music and more through the top entertainment services, as well as a collection of high-quality apps, fast Web browsing and email.

Over its 25 year history, VIZ Media has led the transformation of manga and anime from a niche category into a mass media phenomenon, telling stories that resonate with audiences and fans all over North America. The VIZ Media library includes global hits like BLACK BIRD, BLEACH, CROSS GAME, KEKKAISHI, NARUTO and VAMPIRE KNIGHT.

“NOOK Tablet and NOOK Color are ideal devices for our customers to enjoy manga in stunning high resolution color that virtually makes the action leap off the page,” said Theresa Horner, Vice President of Digital Content for Barnes & Noble. “We’re excited to work with VIZ Media to offer NOOK customers access to some of the most popular manga titles available in North America.”

“The Barnes & Noble team and VIZ Media have put together a fantastic manga reading experience by giving NOOK customers full control of their reading experience with the ability to pinch and zoom to dive into the tiniest details” says Alvin Lu, Senior Vice President and General Manager of VIZ Media. “Barnes & Noble has been a major partner with VIZ Media for many years in growing the North American print manga market, and we’re very excited to expand our relationship to make our vast digital library of manga titles available to NOOK Tablet and NOOK Color customers. Over 100 volumes will be available at launch and we look forward to quickly expanding these selections to more than 500 in the coming months.”