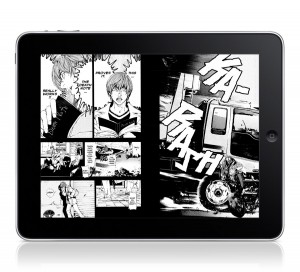 To help promote their digital manga applications, VIZ has announced a giveaway that ends January 30th. If you’re a new user of their iOS application, you can get a free first volume of your choice. Unfortunately, the offer does not extend to users of VIZManga.com.

The VIZ manga app launched in November 2010 for the iPad, and VIZ has since expanded their digital reach to all portable Apple devices as well as the NOOK e-reader.  VIZ currently has 45 series available digitally from their Shonen Jump (Death Note, Naruto)and Shojo Beat (Natsume’s Book of Friends, Vampire Knight) lines as well as the VIZ Signature (Gente, not simple) line, which licenses titles for older teens and adults. Each volume typically costs between $4.99 and $5.99 and can be read across multiple devices once purchased.