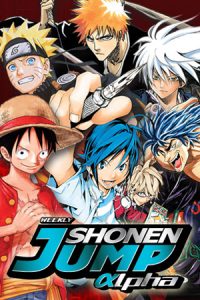 If you happen to be in the Los Angeles area on January 28th, stop by the West Hollywood Library between 2 p.m. and 5 p.m. and get a sneak peek at VIZ Media’s newest publication. Weekly Shonen Jump Alpha will feature series such as Bleach, Naruto, and One Piece with the goal of distributing the English versions of the series two weeks after their Japanese debut. Along with showing off the upcoming publication, there will also be photo opportunities, gift bags and raffles.

VIZ will be distributing all chapters from Weekly Shonen Jump Alpha digitally via vizmanga.com as well as their applications on iPhone, iPad and iPod Touch. Subscriptions are planned to cost $25.99 per year or $0.99 cent per weekly issue. The publication will officially go on sale on January 30th.

The event is FREE to attend and takes place between 2:00pm-5:00pm in the library’s Community Room. The West Hollywood Library is located at 625 N. San Vicente Blvd., West Hollywood, CA 90069. Additional library details are available at: http://www.colapublib.org/libs/whollywood/index.php

Each new digital issue of WEEKLY SJ ALPHA will treat manga (comics) fans in North America to the latest chapters of some of the world’s most popular manga series only two weeks after they debut in Japan’s massively popular WEEKLY SHONEN JUMP magazine. The first issue of WEEKLY SJ ALPHA goes on sale January 30, 2012, and will be available through VIZManga.com and the VIZ Manga apps for iPhone®, iPod® touch and iPad®. Debut series will include BAKUMAN。, BLEACH, NARUTO, NURA: RISE OF THE YOKAI CLAN, ONE PIECE, and TORIKO.

During the event, attendees will be able to preview the first issue of WEEKLY SHONEN JUMP ALPHA content on several iPads that will be available, meet VIZ Media staff, and take advantage of fun photo opportunities with the world’s most popular ninja, Naruto, and BLEACH’s Kon. Gift bags will be given away (while supplies last) and attendees can enter to win other fun prizes in a special raffle contest. Japanese snacks such as Pocky provided by Ezaki Glico USA and other refreshments will also be served while supplies last.

“This launch event for WEEKLY SHONEN JUMP ALPHA will give fans an exclusive advance look at our new manga magazine while offering a fun afternoon to celebrate its debut,” says Alvin Lu, Senior Vice President & General Manager. “Our new digital anthology will set an important new benchmark by offering the latest editions of some of the world’s most successful manga titles just a couple of weeks after their Japanese debut. We invite fans to join us on Saturday January 28th in West Hollywood for this exciting launch event!”

WEEKLY SJ ALPHA will be made available through an annual membership that provides 52 weeks of access to 48 weekly issues for just $25.99. Single issues of WEEKLY SJ ALPHA can be read for four weeks for only $0.99. Each issue, once received on one device, can be read on all other enabled devices through the easy-to-use integrated VIZ Manga platform which includes the VIZ Manga Apps for iPad, iPhone, and iPod touch as well as VIZManga.com.

To prepare fans for the debut of WEEKLY SJ ALPHA, VIZ Media is also offering the SHONEN JUMP DIGITAL WARP, a limited collection of digital graphic novel speed-ups that will bring North American readers up-to-date with Japanese releases, in some cases jumping ahead of the print releases in North America. The SHONEN JUMP DIGITAL WARP is ongoing on VIZ Manga with NARUTO Volume 55-57, BLEACH Volumes 49-52 and ONE PIECE Vols. 61-63 available now (print editions forthcoming).