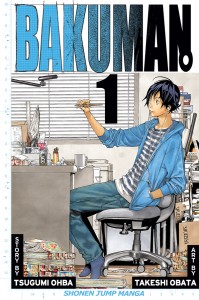 Fan art is a big part of the anime and manga community, and VIZ Media and Shonen Jump are looking to reward you for yours. If you create some new fan art based on the series Bakuman by Tsugumi Ohba and Takeshi Obata, you could win yourself some new art supplies including markers, software and more.

The full details can be found over at Shonen Jump, but in short, if you’re 13 or older, just submit your original Bakuman fan art and they will be judged by a team of  editors and designers from VIZ and Shonen Jump.

Submissions are due by April 29th and must be submitted by mail to VIZ Media’s headquarters in San Francisco. The winners will be announced on June 7th.

Let us know if you win!

TAP YOUR INNER MANGA ARTIST FOR THE OFFICIAL BAKUMAN。ART CONTEST

Love To Draw? Win Valuable Prize Packages Of Art Supplies From The DELETER Manga Shop, Sakura Of America, and More!

VIZ Media and SHONEN JUMP Magazine invite fans and artists to participate in a new art contest inspired by the hit manga (graphic novel) series BAKUMAN。. Contest submissions will be accepted until April 29th and may be mailed to:

A release form must be signed and included with each submission. More information and the release form is available at: www.ShonenJump.com/bakumanfanartcontest.

Winners will be announced on June 7th.

BAKUMAN。(Rated ‘T’ for Teens) is written by the author of DEATH NOTE, Tsugumi Ohba, with artwork by Takeshi Obata, the artist known for series such as DEATH NOTE, HIKARU NO GO, and RALΩGRAD. The story follows average student Moritaka Mashiro, who enjoys drawing for fun, but when his classmate and aspiring writer Akito Takagi discovers his talent, he begs Moritaka to team up with him as a manga-creating duo. But what exactly does it take to make it in the manga-publishing world?

For more information on BAKUMAN。 or other Shonen Jump titles, please visit www.ShonenJump.com.

Since 1984, DELETER has manufactured an innovative line of high quality manga art supplies and accessories, including pens and markers, paper, screentones and instruction books. The company’s products are sold in Japan and 25 other countries. More information is available at: http://deleter-mangashop.com.