E3 is kind of like your first Christmas after figuring out that Santa Claus isn’t real. Sure, it’s still fun to anticipate all of the presents that will be waiting for you under the tree, but now you understand there is no magical fat man hopping from house to house, delivering toys to the millions and millions of children across the globe. You accept that your parents will get you whatever is within their financial means. It’s not as if you won’t be grateful for what you get, but now you amend your Christmas wishlist by adding underlines to the gifts you REALLY want, or add stars to each side, so when it comes down to the nitty gritty, your parents can say, “Oh boy, I think little Timmy would really want this Blastoise-themed super soaker more than anything on his list. We need to make sure we buy this.”

All of us gamers begin this eve of E3 with giddy excitement, just like we did when we left out cookies for old Saint Nick, which only leads to being let down. But, since E3 is only a day away, let’s pretend like all of the magic is real, and everything that you could ever ask for comes true this year. Could we even begin to count what we would all collectively want to happen this year? Well, I offer you a list of five “anti-predictions” for this year, so strap in and get ready for a heaving helping of hope with a sufficient sprinkling of sarcasm.

Microsoft scraps all of their terrible Xbox One ideas, Peter Molyneux confesses. 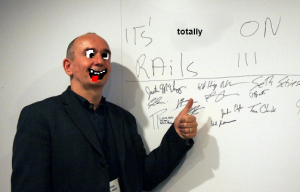 Finally listening to all of their potential customers, the suits over at Microsoft decide to dump their dystopian, 1984-esque spybox. “We realized how much everyone hates the Kinect. Hell, I even hate it,” Don Mattrick will say to everyone attending the Microsoft press conference. After the amazing news, Microsoft will belt one out of the park by redacting the once-a-day connection debacle. Don will start off this announcement by saying, “A lot of great folks serving in America’s armed forces really enjoy playing Xbox 360 while deployed overseas. So instead of losing an ENTIRE customer base for the sake of monitoring our consumers, we’re getting rid of that whole idea.” After showing off some new, non-Halo IP’s, Don Mattrick will then formally apologize for the huge mess he has made. This will be followed by Peter Molyneux addressing the audience, giving us the the true reason how the Fable series was named. “Well, you see,” he’d go on to say, “I started out promising all of these amazing game features in each of the three Fable titles, nearly half of which never made it into any of the games. You see, I spun up my own ‘Fable’ by lying to all of you!” Then he flies off the stage by using his fart-powered jet pack.

Sony’s PS4 gets an affordable $299 pricetag. The Last Guardian confirmed for launch. 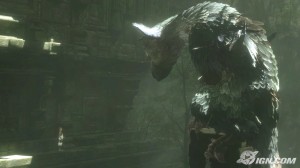 Kaz Hirai approaches the stage, picks up an electric guitar, and just shreds for five minutes straight. Then, seemingly out of nowhere, Phil Collins approaches the stage and climbs behind a once-hidden but now very apparent drum set. The whole press conference is done like this. In between sweet drum solos and killer guitar licks, Kaz announces all of the amazing things the PS4 will launch with, like the still-free PSN online capability, the highly anticipated The Last Guardian, Killzone: Shadowfall, Final Fantasy Versus XIII, Kingdom Hearts III, Metal Gear Solid 5, and a huge digital storefront for all of the indie titles that have been PC exclusive for the past year. To end the show, Hirai screams “How does $299 U.S. dollars sound, Bitches?!” Then he rips off his shirt, revealing a tattoo of a QR code, that when accessed, will link you to a full image gallery of the PS4 hardware.

Reggie Fils-Aime bench presses Satoru Iwata, then they announce a ton of awesome stuff in unison. 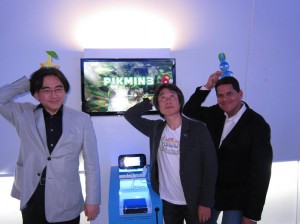 Not having any hardware to announce, the E3 edition of Nintendo Direct cuts the crap: no lame sales pitch, no long introduction, just a continuous conveyor belt of awesome game announcements. We get annoucements and/or new trailers for Super Smash Bros. 4, Super Luigi Galaxy, Fire Emblem X Shin Megami Tensei, Legend of Zelda: Wind Waker HD, Legend of Zelda: Wii U, Capcom vs, Nintendo, Metroid Prime 4, a new Final Fantasy for 3DS, Starfox for Wii U, Legend of Zelda: Majora’s Mask 3D, Chibi Robo for Wii U and 3DS, Resident Evil 2 remake, among at least 20 other surprises.

Also, while bench pressing Satoru Iwata, Reggie will talk about a slew of connectivity features between the 3DS and the Wii U, cementing the idea with a brand new Legend of Zelda: Four Swords title. The shot will pan over to Shigeru Miyamoto in yoga pants. He’ll bow for a total of five minutes in gratitude for all of the loyal fans who have purchased his games for the past 20 years. Then he will go on to talk about a new Pikmin title for the 3DS. After showing off a satisfying gameplay segment, he’ll then move on to Legend of Zelda: Link to the Past 2. He gives us a release date of July 20th, 2013. The whole show concludes with another fireworks display from Nintendoland again as a joke, but then has an encore announcement and trailer for the Wii U’s brand new Gamecube Virtual Console store front, available that very day, with launch games such as Luigi’s Mansion, Super Mario Sunshine, Metroid Prime, Waverace: Blue Storm, Super Smash Bros. Melee, and Eternal Darkness. As a final treat, anyone who goes to play the E3 demos at Best Buy gets a free t-shirt featuring Reggie’s face on it, with the saying “My Body Is Ready” in bold faced print on the back. 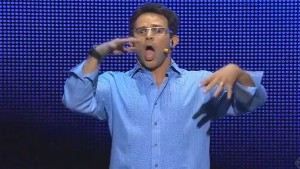 Instead of tying them up, dragging them out behind the building and shooting them after their respective conferences, Ubisoft decided to cage the embarrassing duo with very little food and water for weeks, and then unleash them upon the press conference stage again, promising them that whoever makes a bigger ass out of themselves gets a free steak dinner. Chaos ensues. Also we get to hear how TOTALLY AWESOME Far Cry 3‘s co-op will sound again. Because that whole thing wasn’t scripted, right? 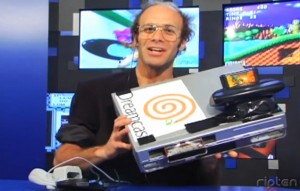 Number five won’t work unless number 1 or 2 doesn’t happen. In a world where the Xbox One keeps all of its invasive, anti-consumer bullshit and the PS4 ends up following suit (because they can), this announcement will be what restores my faith in the games industry. In a surprise midnight keynote, headed by the one and only Keith Apicary, Sega announces the Dreamcast 2. It doesn’t feature Facebook integration, Youtube uploading, share buttons, online requirements, microtransactions, or any of that crap. It does feature ports of all the wonderful games you can only play in Japanese arcades, and launches with Powerstone 3, Crazy Taxi Rush, Virtua Fighter 6, Caution Seaman 2, Phantasy Star Online 2 (for USA and Europe), Shenmue 3, etc. A new Silent Hill title, developed by the original team, becomes Dreamcast 2 exclusive. the VMU games make a comeback via a smartphone app, and the console is region-free. It comes with a $249 price tag and will be out September 2013.

But then I woke up, got ready to watch E3, and remembered that Santa Claus isn’t real.