A few weeks ago, it was announced that Sega Sammy won the bidding contest to take over Index Holdings, the parent company of Atlus. Sega beat out 20 other companies to acquire Index, purchasing the company for 14 billion yen (about US$144 million as of publishing). This follows on the heels of Sega purchasing Relic Entertainment earlier this year, as well, during the THQ sell-off. Atlus CEO Naoto Hiraoka has said that things will continue to be business as usual for the company continuing forward, though there will inevitably be some tweaks.

Index first became the parent company of Atlus in 2006, and formally absorbed the company into itself in 2010, though it retained the Atlus brand name for publishing purposes. While Index’s purchase of Atlus provided stabilizing capital for the latter, it always felt like a cross between an arranged, political marriage and a time bomb. Index juggled a wide variety of subsidiaries and acquisitions in its 18 year lifespan, but rarely held on to them for very long. While I expected them to shuffle Atlus off to another company eventually (as it did with Madhouse animation studio), I didn’t expect it to be under the duress of bankruptcy proceedings. Index had already sold off the online division of “Atlus” (part of Index Digital Media) to Marvelous earlier this year, prior to the bankruptcy filing, so Sammy / Sega Dream will only be acquiring their more traditional IPs. Even so, what does this mean for Sega and Atlus, both in Japan and abroad?

While the newly-created Sega Dream subsidiary is currently being described as a separate entity from other aspects of Sega Corporation, there will undoubtedly be some sharing of talent across the lines, especially away from Japan. The intricate details are still being worked out, but the final deal is set to be wrapped up by November 1st at the latest; however, we may already be seeing the effects, as Sega of America has announced a “small number” of layoffs, much smaller than the layoffs experienced by the American branch last year. While nothing has been confirmed, several rumors (yes, rumors, not facts) are pointing to it being part of their localization staff, which brings us to the first positive of this deal for Sega: they gain a well-respected North American localization staff in Atlus, U.S.A.

Though not often, Atlus, U.S.A. has localized a few games from Sega before (Puyo Pop Fever, Shiren the Wanderer), giving the two companies at least a passing familiarity. Atlus’ localizations have been held in high regard by western fans of JRPGs, arguably moreso than those from Sega of America. So, if SOA does lean on Atlus, U.S.A. for localization in the future, they will definitely be getting quality work. The only concern would be what games are being brought over if the Atlus staff has to serve two masters, as it were. On the bright side, it heightens the possibility of games like Phantasy Star Online 2 finally coming overseas. However, it could also mean that somewhere down the road, the team would have their hands full localizing a smaller Sega title (say the next iteration of Mario & Sonic at the Olympic Games) when they could be working on Persona 5, a prospect that Atlus fans would likely foam at the mouth over.

Of course, while Hiraoka has said Atlus will carry on with their current plans, Sega has also said they are interested in turning Atlus IPs into mobile games and using them to expand their PC market. If that happens in the near future, and Sega Dream puts the Atlus staff to work on Etrian Odyssey Mobile or Shin Megami Tensei: Phone Hackers, it could lead to delays in getting Atlus’ heavy hitters out to the masses. While, hopefully, Sega won’t be foolish enough to try something like that, other Japanese companies have already succumbed to the pressure of the expanding mobile market (I’m looking at you, Square Enix), so it’s not completely impossible. Best case scenario, Sega not only lets the Persona team finish up Persona 5 in a timely manner, but also lets them take a swing at resurrecting some of Sega’s old RPGs, too (say, Skies of Arcadia?).

It may not all be sunshine and rainbows, though. Perhaps the biggest concern of all is Sega of America’s poor track record of advertising some great series. Most every JRPG fan knows the tribulations of Valkyria Chronicles in North America. If you don’t, here’s the short of it: The game launched under the radar in November 2008 to critical acclaim yet remained unknown to the public at-large. The result was a piddling 33,000 units moved during the first month, not what a new IP needs to stay alive. Fortunately, Sega timed a price cut for the launch of the anime adaptation in April 2009, and sales took off. Later, Valkyria Chronicles 2, while not handled quite as poorly as the original, faced the double-whammy of being on the PSP (which simply never had great numbers in North America) and a still under-funded marketing push, sounding the death knell for the series in North America. We can all hope that Sega has learned their lesson, but JRPG fans are going to be understandably gun-shy until there is proof positive that it won’t happen again. In Japan, Sega already signed a distribution deal with Index back in 2012, meaning much less change across the Pacific, which is fortunate for Japanese gamers. In Europe, though, this will likely spell the end of publishing deals between Atlus and companies such as Rising Star and NIS America, who is already smarting from losing the Atelier series to Tecmo Koei.

Sega Sammy could also decide to cannibalize Atlus, taking the best of its talent and IPs, leaving the scraps behind. It wouldn’t be the first time a company did that, nor, sadly, would it be the last. It’s also possible that Sega could cut Atlus, U.S.A. loose wholesale, leaving it to flail about, searching for something to license, though if the aforementioned rumors about the localization staff are true, that seems less likely. And Sega could simply fumble away some great game series, leaving Shin Megami Tensei to waste away while they work on their own pet projects.

The reality of it all is that none of us knows how things will play out; all anyone can do right now is hope and speculate. While there are many who bemoan Sega’s acquisition of Atlus, it’s quite possible for the two to create a wonderfully symbiotic relationship. With Sega’s capital backing Atlus’ staff, there really could be some great things in store for both companies. Only time will tell, but… 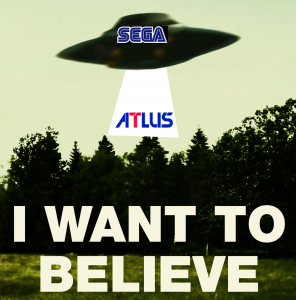