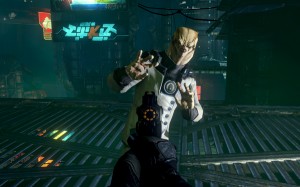 Prey 2, the ambitious sequel to the equally ambitious portal-jumping FPS Prey, has had a rough couple of weeks.

First, rumors of its cancellation struck fear into those looking forward to Prey 2. But as Game Informer reported yesterday, Bethesda buried that rumor by saying that Prey 2 isn’t cancelled…it’s just delayed indefinitely. Here’s what Bethesda had to say about the delay:

“Development of Prey 2 has not been cancelled but the game will not be released in 2012 as planned. The delay is due to the fact that game development has not progressed satisfactorily this past year, and the game does not currently meet our quality standards. Prey 2 has shown great promise and we regret disappointing our fans. We have made a substantial investment in game development to deliver the experience fans want. We are determined only to release the AAA game that fans rightfully expect, and are unwilling to compromise our quality standards to meet a release schedule.”

So it hasn’t been cancelled, but it wasn’t good enough to be released this year as planned? I can live that.

However, a new report from Shacknews added more drama to the game’s tumultuous development. According to an unidentified source, Prey 2 developer Human Head was unhappy with their current  contract with publisher ZeniMax and quit working on the game entirely in November. Clearly trying to force ZeniMax into a better deal by playing hardball, the move seemed to be working—until all contact with ZeniMax ceased in January. This spelled bad news for a few members of the team who had been laid off during the strike, as their hopes of being rehired after a new contract was forged suddenly seemed faint.

So while Prey 2 isn’t cancelled (good news), it is delayed indefinitely (bad news) and—if Shacknews’ source is to be belived—its developer is unhappy (more bad news). And if this goes on any further, Human Head could potentially be replaced as Prey 2’s developer (when it rains…).

And so I ask: what the heck is going on with Prey 2?