Dealing the final blow against Ganon in The Legend Zelda: Wind Waker. Meeting the business end of Dr. Salvador’s chainsaw for the first time in Resident Evil 4. Facing off against the inexplicably angelic final form of nearly every JRPG villain. Gaming is oftentimes defined by these and countless other climatic events that players confront. It is important, however, to recognize that even the smallest of details can make a profound impact to a game’s experience. These are just a few of the moments that, if removed from their respective titles, would have greatly worsened the overall impact. If you have any similar moments you want to recognize, please share in the comments below.

Okami – Flowering Footsteps
Adventure games offer expansive, exciting worlds for players to explore. From the grassy expanses of Hyrule Field to the dark, often terrifying depths of Dark Souls, the environment the game takes place in is just as important as the events that occur there. As one would expect, however, a large game world means that sometimes it will take your avatar a long time to travel somewhere. Therefore, it is crucial that the method of travel be able to keep the player’s interest from waning. Okami is a perfect example of how to do so, taking the simple act of moving and making it interesting and engaging. As Amaterasu moves across the land of Nippon, flowers spring up in her wake. Several seconds of continuous motion cause the trailing greenery to increase, which in turn causes a speed increase as well. This turns a tedious action into something engaging. Many times, I would challenge myself to navigate through crowded environments without losing my momentum. This kept travel from feeling stale all the way to the end. Not only that, this small visual flair kept in tone with the game’s overall theme of healing and nature. For an example of this, check out this YouTube clip that shows a race you can run as a sidequest.

Death is an unavoidable theme in many games, and the ways that a game deals with death can make for some of its most memorable moments. Like many multiplayer shooters, Valve’s Team Fortress 2 makes a small announcement whenever a player is killed. Most games use these messages to name the killer and the victim, and perhaps detail the weapon used. What sets TF 2 apart are the small icons and pictures that give a simplistic recreation of the event. Some of these show the outline of the weapon involved, which can range from standard fare like pistols and shotguns to more outlandish devices like laser guns, katanas, and even mailboxes. The more interesting pictures, however, show crude stick figures being shot, burned, vaporized, or suffering some other cruel yet silly death. In another game these might seem callous or mean spirited, but they perfectly reflect Team Fortress’ comedic style and sense of humor. Team Fortress has the feel of a Saturday morning cartoon show, and this presentation is what pulls me back to it day after day. Plus, there an icon that shows two stick figures being killed by the same sniper bullet, and it’s hilarious.

Super Meat Boy – Level Replays
Super Meat Boy is a platformer that thrives on the idea of death. The titular character will die countless deaths in any number of horrible ways. Like Team Fortress 2, Super Meat Boy plays its ultraviolence through a humorous, cartoon filter. Buzz saws, rockets, lasers, and bottomless pits are common obstacles and give players a run for their money. It’s an insanely difficult game, and the fate of the character oftentimes mirrors the frustration felt behind the controller. Upon successfully navigating one of the labyrinths of doom, players are treated to a cathartic release in the form of a replay. The game will display every attempt made to complete a level, all at once. The result is dozens or even hundreds of Meat Boys running, jumping, and exploding into piles of gore, as can be seen in the YouTube montage below. The effect is often hilarious and triumphant, as it shows the player’s miniature army slowing being whittled down until the lone, final sprite makes it to the end. The imagery of the players attempts and deaths also ties into the game’s story. While journeying to hell, players would witness thousands of Meat Boys, representing all of their past failures. This small detail provides a connection between you and your lovable boy of meat. 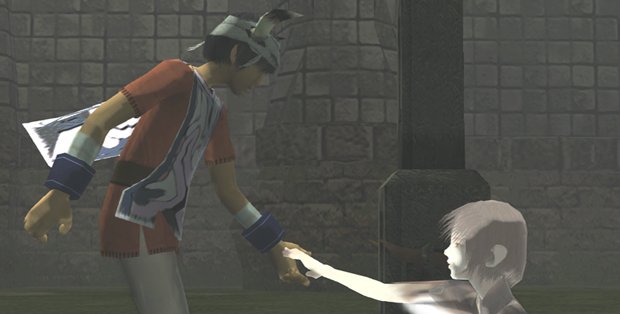 Many games have used storytelling and dialogue to promote an emotional connection between players and their in-game counterparts. While there are many examples of deep, engaging stories from video games, it is a connection that can also be obtained from non-interactive media, such as books or film. One of the greatest things about video games as a medium is how player interactivity reinforces the bonds between them and the game they are playing. One of the best examples of this comes from Ico, and it is focused upon a basic physical connection between its two main characters. At the start of the game, the titular Ico is locked away in a strange castle. There, he finds and frees a young girl, Yorda, who is imprisoned in a cage. Together, they attempt to find their way out while unraveling the secret behind the girl’s mysterious powers. While not the most original of scenarios, Ico distinguishes itself in how it portrays their relationship. There have been many games where the player must escort another character and protect them from danger. Where other games have this vulnerable NPC wander on their own, Ico takes a more hands-on approach (pun not intended). The player can, at any time, walk up to Yorda and take her hand. This physical connection serves many purposes. From a mechanics side of things, it makes it easier to direct her to where you want to go without relying on AI pathfinding. More importantly, however, this small gesture represents vulnerability. Without assistance, Yorda is completely helpless, and becomes a target for strange creatures who try to snatch her away. Players feel responsible for Yorda, which makes the struggle to save her all the more meaningful. This feeling is quite profound, and it is accomplished without a single word spoken between them.