Way back in 2004, Nintendo’s President, Satoru Iwata, was famously quoted as saying, “customers do not want online games.” This philosophy explains why the Gamecube had a only a handful of online games in its library. Obviously, Nintendo has since revised its online stance. Both the Wii and DS supported online multiplayer and shopping, and Nintendo introduced community aspects with the 3DS’ Swapnote and Nintendo Video features. The Wii U seems to take this focus to the next level, with special emphasis on the Miiverse, an online community of Wii U players that shows gaming trends and comments. Emboldened by this turn of events, we here at The G.A.M.E.S. Blog have put our heads together to come up with what we think could be the killer app for the Wii U: a Pokémon MMORPG. In order to make sure everyone’s on the same page, MMORPG stands for Massively Multiplayer Online Role Playing Game, and is what happens when you combine Final Fantasy and real life. It provides players a chance to meet, challenge, and cooperate with other players who share similar interests. To be honest, an MMO Pokémon game is something so painfully obvious that we’re baffled as to why Nintendo hasn’t made it yet.  It would reach out to whole new markets and demographics, and much of the framework has already been established by the current series itself. Here are a few of our thoughts on how Nintendo could approach this game, and why it would be awesome. See something we missed, or something we totally nailed? Let us know in the comments below.

Like a typical MMORPG, the world of Pokémon tends to be divided into safe zones, like cities and towns, and wilderness, be it forest, plain, cave, ocean, mountain, volcano, whatever. In order to combine the two,  the wild zones need to be expanded from the narrow corridors they tended to be in the previous games. Instead of a thirty second jaunt from Pallet Town to Viridian City, an expansive grassy field should meet players as they take the first steps on their journey. One of the biggest draws of an online RPG is the expansive, interesting environments to explore, and the world of Pokémon already has simplistic versions of these just waiting to be fleshed out. One thing Nintendo should bring over from the games is the destructible aspects to the environments. Gaining HM’s by achieving milestones in the game would grant players the ability to clear vegetation, move boulders, or light up dark caves that hide secret areas and treasures. This way, the game could let players return to previously explored areas and still accomplish new goals. 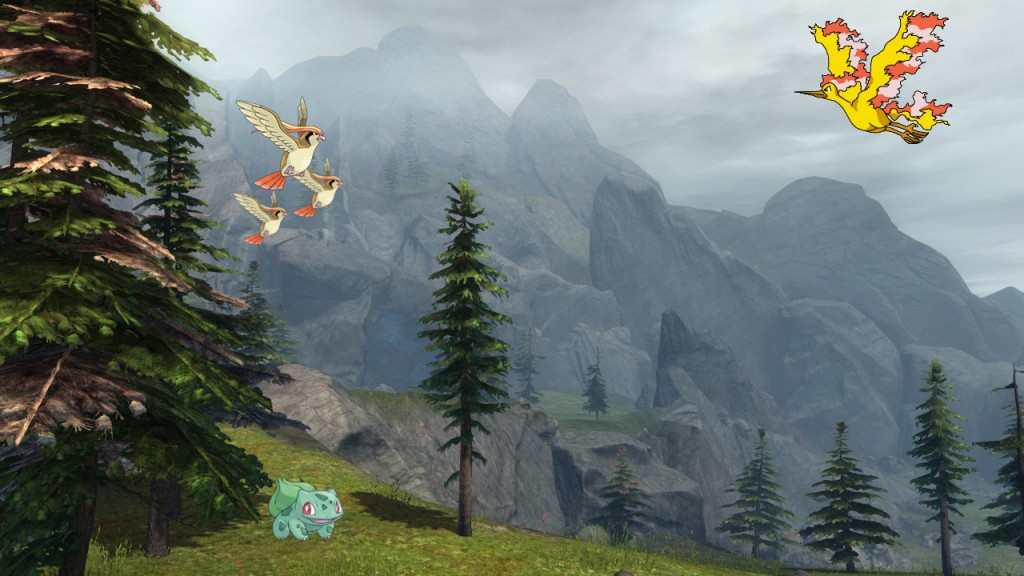 One thing that should be changed from the source material is the random encounters. Pokémon games in the past have used random encounters because of technical limitations. With the extra horsepower the Wii U provides, Pokémon Online could make each creature visible from the field. As players explore Mt. Moon, flocks of Zubats might hang from the ceilings, while lone Geodudes prowl the floor below. This visualization could also show the differences in scale between the various Pokémon. The handheld games always have a hard time comparing the size of a Gyarados to that of its predecessor, Magikarp. Now, you could be fishing at a lake somewhere, reeling in a Magikarp, when out of nowhere it evolves, leaving you to battle with its enormous new form. It will make battles all the more exciting when your tiny Horsea one-shots that towering behemoth with a well placed Ice-Beam (quadruple damage ftw!)

On that note, we feel that battles should remain turn-based. While most MMORPGs tend to adopt a more active system, the most recent entry in the Dragon Quest series, Dragon Quest X, has proven that a turn-based combat system can work in an online environment. After initiating a battle, players would then be protected from outside influences until the fight’s conclusion. That’s not to mean that combat would be a solo affair. In order to compensate for the herds, flocks, and other silly animal group names encountered (I like the idea of a murder of Charizards), players could team up and enter battles together. It could work similarly to how the team battles in the later games play out: some Pokémon could have skills that provide protection and stat boosts for allies, giving players different strategies when battling in groups than when solo. Some attacks, like Surf and Earthquake, could damage all enemies and allies in battle, making their use a more calculated affair.

While the idea of running around, training your ultimate team of plants, animals, and inanimate objects to max level sounds fun by itself, we feel that World of Pokémon has the potential for even more. While everyone playing should be a Pokémon trainer, additional professions could be give players who want more than just combat some play variety. Here are a few of the ones we’ve thought up:

Geographically, the Pokémon world is already set up perfectly for an MMO system. The easiest way for designers to get the game off the ground would be to use the series’ first two areas, Kanto and Johto, as the base version of the game. They are already connected, neighboring areas, allowing players to start in two different regions instead of confining them to just one. The Orange Archipelago from the anime series could also be included in the original version to provide veteran players with a new area to explore. Over time, expansions could be released to add Hoenn, Sinnoh and Unova, adding their region-specific Pokémon and perhaps some new job classifications, storylines and more. The fact that there are already three inherent expansions means that this game could keep adding content for a good, long while, which is just what an MMO needs to keep players coming back over the years.

Assuming the MMO starts with Kanto and Johto, for story purposes, it may be easier to set the world in the near-future of the  handheld games. It would be hard to rationalize thousands of new Pokémon trainers pouring out of quaint, little Palette Town and New Bark Town as they stand in their respective games. However, if Pokémon universities were built thanks to the research efforts of Professors Oak and Elm, these could serve as a gathering point for future Pokémon trainers and support personnel. This would also let them establish a new story for players to enjoy while still being able to reference back to the events of the existing games.

Once players set out, the obvious series of events would consist of traveling from city to city, challenging gym leaders to collect all of the badges, allowing the players to eventually reach the region’s Elite Four. However, that alone wouldn’t give the game much long-term value. Once players have collected their badge at a gym, they can enter to become the Player Champion of each gym, a player-vs.-player event using restricted Pokémon sets that are specific to each gym (e.g., rock types in Pewter City, ice types in Mahogany Town, etc.). This system would essentially put players into the role of being a Gym Leader with rankings for each gym determined by an Elo system or something similar. Rising to certain levels within a gym could unlock rewards for the character.

Players whose characters are more support-oriented (breeders, scientists, nurses, etc.) would still need their own impetus to travel from city to city. These characters could travel from area to area completing quests that teach them new skills to improve their professions. That way, a group of friends could go to a new town together, and while the trainers are getting their badges,  the team can also set out on their own profession related side-quests. Depending on the profession and the town, these quests could take just about any form: escort missions, gathering quests, etc. They could also have competitions to put their skills to the test with rankings similar to the Player Champions for the gyms.

In addition to the standard game progression, running PokéQuest would also allow for special events where trainers could catch rare Pokémon such as Celebi and various festivals around the Pokémon world could let support characters obtain rare skills and items. The game could feature the festivals already depicted in the anime series such as the Twinleaf Festival and Wishing Bell Festival as well as some other seasonal festivals referring to real-life holidays. Players could also travel to areas such as the Safari Zone to catch Pokémon (or just throw rocks at them, if that’s your thing), or travel on the S.S. Anne for a nice battle cruise. Certain other areas such as the Battle Tower could be designated PVP areas where players can challenge each other freely while players have the option to decline encounters while exploring the main parts of the Pokémon world.

Boy, I think that we’ve given this idea some thought, don’t you? Big thanks to our Editors, Dan Furnas and Jennifer Griffith for help with thinking up and writing down ideas. This article just goes to show how much we, as longtime fans, want this to happen. Pokémon has been around since 1996, and has so far seen five different generations titles on every Nintendo handheld. With respect to the Pokémon Stadium games, we want something more than just the chance to watch our teams fight in 3D; we want a fully fledged Pokémon RPG on the consoles, with all the care and polish that a series this popular deserves (Sorry, Gale of Darkness, but you don’t count). By embracing the MMO format for PokéScape, Nintendo could further expand the brand, while at the same time appeasing to hardcore fans, giving them a killer app to play on their new Wii U’s. I know that I’d be there on day one, how about you?