It may be as farfetched as a fairy tale, but bear with me: I would love a Fairy Tail video game. I don’t mean anything along the lines of Portable Guild, or whatever hackneyed, button-mashing spinoffs came along with those—that line came and, hopefully, went. Call me spoiled, but what I want is a fully-realized, high-definition, console RPG.

To be honest, Fairy Tail doesn’t exactly have the most unique setting. After all, wizards doing wizardly things (magic) in wizardly buildings (castles, mansions, taverns) in a wizardly era (that stereotypical pre-industrial one) is a tried and true trope—so tried and so true, in fact, that we almost believe it could, somewhere and somehow, exist. Fairy Tail, however, does a few things to set it apart from its saturated companions; things that make me want to visit Fiore instead of anywhere else. 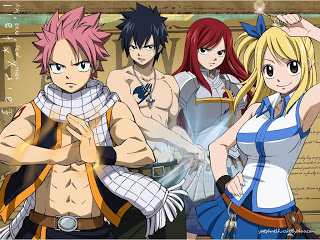 First off, their wizards are “mages,” not “wizards.” Even though some series—like Final Fantasy and Dragon Quest—do this, Fairy Tail goes out of its way to note that these people are, in fact, wizards, but are etymologically referred to as mages (hence: Ten Wizard Saints are all, incidentally, mages). It’s a present and successful, if subtle, push towards differentiation.

Second, these mages have so much heartfelt camaraderie—I know, I know; almost every JRPG or manga or anime has a sickening amount of “I fight for my friends!” or “I’ll never back down!” nonsense—that I would want to fight alongside them. Even if their AI was as daft and as inept as could be—like, say, that of your partners in Ni No Kuni—I’d still feel like they had my back, and that’s one of the most important aspects to cultivate in an RPG.

Slowly cultivating a party, forming bonds between characters, meticulously strengthening your favorites, both numerically and narratively: that is the primal joy of JRPGs. It’s all about inter- and intra-personal connections, cheesy as they can sometimes be. This is the strongest part of Fairy Tail, and is something that would make for an easy translation into video games, and, at that, the easiest genre to build such connections is with a JRPG, due to the fact that many of them run forty hours or more—plenty of time for characters to grow and grow. And as for growing, Fairy Tail characters do so drastically. Even Happy, the flying cat—Sorry! Exceed—becomes more reliable and more resilient as the story progresses. But I’m not just talking about characterization and exposition; without substance, that stuff gets really boring, really fast.

One of the aspects specific to Fairy Tail that would make for a smooth transition into a game is the fact that all of the characters literally grow—their muscles get bigger, their smiles get wider, their hair gets spikier. For example, Mira sprouts demonic wings; Gray learns how to turn his arm into a sword; and Elfman, well, doubles in size. Additionally, each character frequently—as in, nearly every arc—learns new magical tricks, moves, illusions, whatever you want to call them. These developments are narratively shoed-in points for two essential functions of JRPGs: leveling up and learning new attacks. Come on, game developers: Mashima is basically handing that one to you!

Third, the music—oh, the music. Say what you will about the anime, but Yasuharu Takanashi (Naruto Shippuden, Halo Legends) contributed a damn good soundtrack. At points intense and gripping, at others solemn and moving, every song would fit well into a game’s soundtrack—the main theme, particularly, would be all-too-fitting for battle music.

Though, I should add, the battle mechanics are not necessarily important—in fact, those typically comprise the most grueling, unentertaining parts of JRPGs. The important part is exploration, freedom to immerse yourself into a grand and wondrous world. Freedom to go shopping or dining, maybe napping in between, and then going out and kicking some monster’s ass. Freedom to pick what people adventure with you, to pick apart the nooks and the crannies of Fiore. These are all things you can’t do while sitting back and watching or reading. Fairy Tail is a fantastic series, but sometimes it’d be nice to be in control of Natsu and his friends, tell them where to go and what to do.

I don’t think a Fairy Tail RPG would break any ground, but it would, at least, be a refreshing addition to a genre that doesn’t get much conglomerate attention here in the States. Plus, as an existing franchise, it’d sell—that doesn’t, however, guarantee critical acclaim. (I’d settle for a Tales or a Final Fantasy re-skin!) Though, whatever you do—Namco, Square, Konami, whoever—make sure to cut it off before the Tenrou arc. Because that was bullshit.