Sometimes, it’s hard being a gamer. Not, like, calculus-hard or pitching-a-story-to-the-Onion hard, but it can still be pretty rough. I mean, on the one hand, we’ve got the obvious obstacle of the difficulty curve that comes inherent with navigating programs designed to grow exponentially complex and challenging as more time is spent with them. On the other hand, we have to deal with the perpetual berating condescension that media doles upon the industry for being a supposedly inferior medium—that one’s not cool.

For us gamers, these are inconsequential; one we put upon ourselves, and the other ultimately does not affect us in any way. What poses the biggest hurdle, ironically, is the games industry itself. Were we informed a little bit more—maybe not kept in the dark quite so much—it could only benefit everyone involved: players and producers alike.

With other industries, it’s easy to speculate a series’ future. In film, if a movie doesn’t sell well, no dice (if it does, though, expect a sequel by the following Olympics). In literature, if a story, narratively speaking, merits a sequel, it’ll get one within a few years—unless, of course, the author either dies or goes by the name of one George R. R. Martin.

In games, we get shit. It took Square Enix six years to give us anything concrete about Final Fantasy Versus XIII—and it doesn’t even go by that name anymore! I don’t think it’s necessarily something that needs to be changed; after all, it allows for built-up hype, which creates strong day one sales, which brings in more money for better games in the future.

It’s just that—sometimes—it’s hard. Sometimes, it gets a little ridiculous.

Look at the skate. series, for example. In 2007, EA Black Box released the first entry to critical acclaim and commercial success. The control scheme, a physically accurate translation of skateboarding techniques, brought a much-needed renovation to action sports video games. Gone away were the press-A-to-jump mechanics, replaced instead by the innovative “flick it”. 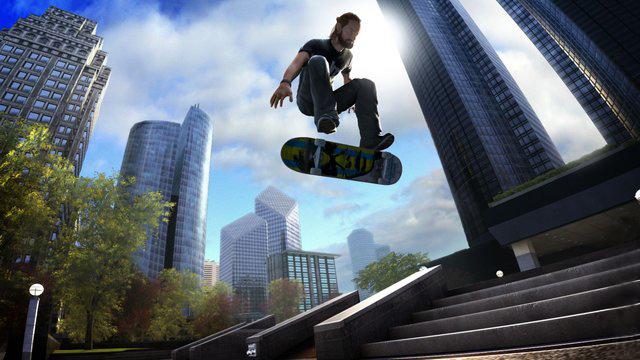 With “flick it”, players would replicate what a skater would have to do to perform tricks in real life: hold down on the stick to crouch, flick it up to ollie. Different directions of the stick, both in terms of “hold” and “flick,” would make the character do various tricks.

Unlike the the Tony Hawk series—remember those awful cash cows?—the character was grounded with realistic, 9.8 meters-per-second-squared physics. This led to bone-shattering, unforgiving consequences; landing a simple kickflip was harder to do in skate. than it was to land a 900 in Tony Hawk’s Underground. For the first time, action sports video games received a realistic, but still entertaining, simulator.

skate. sold so well that, the following year, Skate 2 came along. Then, a paltry year and a half later, Skate 3 came along, followed by a batch of half-hearted DLC. Then, nothing.

And we haven’t heard a word since.

I think it’s about time for us to hear something—anything. In two short months, the next console generation will be upon us. That means this past year has been chock full of game announcements for sequels, reboots, offshoots, and—however occasional—zany new titles. Not even a mention about skate., though; we got fucking Killer Instinct before that!

That said, despite years of inactivity, Black Box folding into EA Canada and downsizing earlier this year, I still have hope. Maybe if we pray to the right gods—or even offer Bam as a sacrifice to EA—we’ll get a new skate. And maybe, this one will be great; more than just a niche and fun, but not particularly amazing, arcade title.

The series’ three iterations were plagued by poor loading times. Session markers—locational pinpoints utilized to return to a specific drop—were a refreshing and innovative step forward for continuous play. However, travel too far away from them, and you’d end up with ten seconds or more of loading screen. Considering the fact that most runs last roughly ten or fifteen seconds, and you’d end up looking at a blank screen for the same amount of time you’d actually play. This is a travesty; even more so for the vast, open worlds that comprise skate. titles.

With these new pieces of hardware, both of them complete with increased RAM and other powerful technology, loading screens could, conceivably, not be an issue any longer. How cool would that be? You’re skating around downtown and then, BAM!, you’re in the the hills. EA is one of the wealthiest companies in gaming; it’s hard to imagine they wouldn’t be able to fund an engine powerful enough to handle this. The only fault lays in if they want to.

Give us multiplayer in the next one. The reason I, and many of the people I know who play the series, spent more time with the first two installments was because they were easily playable with friends. The campaigns, in all honesty, don’t have much weight. There’s a limit on how long start-from-nothing-and-get-famous-and-rich narratives can be entertaining, and after the third time, it’s really been enough.

If you, EA, want to make some extra cash of multiplayer DLC, release map packs of older games’ maps and spots. I would happily throw down money for Fun Track alone, for example, because it is the most fluidly laid out park in the entire series. Oh, and also: make it so we can use more than one controller. That one made no sense.

The skate. series has always had an artistry to it; consistently humorous, visually striking, and steeped in creativity—both in that of the developer, and that of allowing the gamer to do what they want, when they want to—it’s a gem among the genre. It hurts me to use clichés, it really, really does, but skate., if anything, warrants it. We don’t need another “backflip over a car and grind a telephone line!” game—see: Tony Hawk. We need to push the medium and push the genre. A skate. iteration on upcoming consoles would be a perfect way to do that.

At the very least, let us know it won’t happen. We’ve been kept in the dark, and, without proper equipment, it’s really hard to see.