For anyone out there who is part of a couple, Valentine’s Day can be a bit stressful. Between looking your best, giving gifts, or even just being nice to the other person can sometimes be harder than it sounds. So, if you managed to make all of the right moves yesterday, good on you. If you didn’t, don’t feel too bad; you are not alone. Here’s a quick look at some video game characters who won’t be inspiring any Hallmark cards any time soon.

Final Fantasy has been a name at the forefront of video game storytelling for decades. In Final Fantasy IV, the love between Cecil and Rosa is so well known that Japanese schoolchildren are taught the “Theme of Love” as part of their music curriculum. Many other memorable moments over the course of the series have revolved around relationships; gathering the party in the World of Ruin, the final performance of “I Want to be Your Canary”, the multiple perspectives of Day Eleven. This brings us to Final Fantasy X. The time-traveling Tidus has become a guardian of Yuna, a summoner on a quest to save the world. They have just fended off a kidnapping attempt, and our hero goes to comfort the distressed heroine. And then:

The No More Heroes series stars Travis Touchdown, the no-good slacker living in the awesomely-named Santa Destroy, California. Finding himself broke after buying a beam sword online, Travis is drinking at a bar when he is approached by Sylvia, who offers him a job. After successfully killing Helter Skelter, Travis finds himself entered into the UAA (United Assassins Association, obviously), and decides to work his way up to Number 1 in order to woo the lovely lass. Along the way, Sylvia constantly taunts and teases him, egging him on to the next fight. 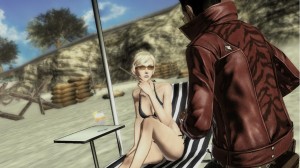 The worst part about it is the reveal that comes at the end of the game.

As any fan of Mario games knows, the relationship between Bowser and the heroes is not very well defined. It seems that he might hold Princess Peach hostage one day, and the next be down for a round of golf, tennis, boardgames, etc. Why would he continue to hang out with people he sometimes seems to revile? Well, the Paper Mario series offers some insight to this question, as its is both subtly and not so subtly hinted that the Koopa King actually has feelings for the Princess. In the first game, Peach, while trying to escape from her floating castle, discovers Bower’s diary. In it, Bowser writes “Day O/X: Cloudy then sunny. Today was great, diary! I used my castle to lift Princess Peach’s Castle way up into the sky! Then I barged into Peach’s Castle and beat up Mario! Yeah! Unbelievable, I know! So fun! And there’s more! After that, I kidnapped Princess Peach! I couldn’t be happier, diary! I hope she likes me…” Now Bowser, let me give you some advice. Kidnapping a girl and beating up her friends is not a good way to get on her good side. You need to wake up. I mean, its not like, if you keep abducting her, she’ll just one day want to marry you or something…. 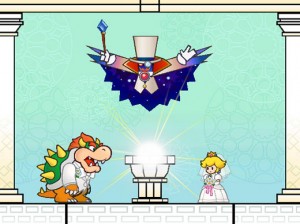 It is worth noting that the following section contains important spoilers for Silent Hill 2. Do not read if you are intending to play the game at some point. 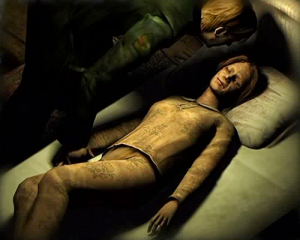 At face value, Silent Hill 2 seems to be a pretty romantic story. A heartbroken man, after receiving an impossible letter from his dead wife, rushes into the unknown to find her. If this were a Disney movie, James would learn an important life lesson before being reunited with his wife for a happy ending. Through the course of the game, you are constantly trying to reach the hotel that the two of them stayed at, while constantly being tormented by horrific monsters. At long last, you cross the lake and reach the hotel room the two of you stayed at. Its then that James finally remembers the full circumstances behind his wife’s death. Unable to watch his terminally ill wife waste away, he actually took a pillow and smothered her to death. Pyramid Head and the rest of the nightmarish monsters the town had thrown at him were, in fact, manifestations of his guilt, anger, and frustration from Mary’s sickness and death. Finally, that’s when you, the player, remember, “Oh, right, this is a Silent Hill game. Happy endings aren’t allowed.”

Have any other examples of video game characters failing in love? Please share them in the comments below.