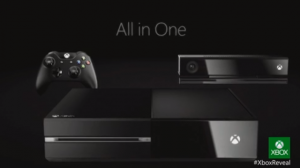 Putting an end to months of speculation, the next gen Xbox was finally revealed at Microsoft’s big event in Seattle today. Contrary to rumors that floated throughout the internet over the past few weeks, the next Xbox is called Xbox One. Though the event was light on details at times, some of the console’s confirmed specs are

Along with the console itself, Microsoft made Kinect a focal point for the Xbox One reveal as they showed how voice and gesture controls can be used while interacting with the new console. “Xbox, on” starts up the machine; “Xbox, watch TV” will start television functions. The Kinect will also allow gamers to take advantage of integrated Skype video conferencing on the Xbox One.

They also showed off the “Snap” multitasking function. Multitasking and instant switching between movies, TV shows, Internet and games is also a neat new addition to the Xbox One feature set. In addition, Microsoft announced that 15 exclusives will be launched within a year, out of which, 8 will be New IPs. In the games department, they showed off trailers for Call of Duty: Ghosts and Remedy’s new game Quantum Break.

While no specific price or date was given, Microsoft’s Don Mattrick did say that the Xbox One will launch “later this year.”