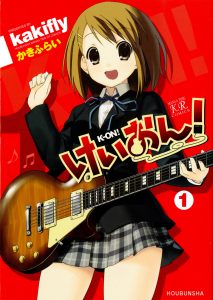 If Yen Plus seemed more excited than usual this month, it may be because they added two new manga, each sporting their own exclamation point. According to Project Haruhi, K-On! and Yotsuba&! made their debuts in the latest issue, and Yen Press’ own website confirms this.

K-On!, written by kakifly, is a slice-of-life comedy that follows a group of high school girls as they try to form a band. The series started in 2007, and there are currently four volumes in Japan. Yen Press will be publishing the first English volume in November.

Yotsuba&!, written by Kiyohiko Azuma (who also wrote Azumanga Daioh), follows the young, quirky and naive Yotsuba as she learns about the world around her. The series is still ongoing in Japan and nine volumes are currently published. Yen press will be publishing the English version of the ninth volume in December.

Originally a print publication, Yen Plus is Yen Press’s online manga magazine. Along with manga, it also contains manwha titles such as Jack Frost and Aron’s Absurd Armada and a few orignal English language works as well.