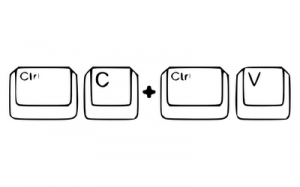 And those 2 commands are ctrl+c and ctr+v.

In a story in SF Weekly a former employee (anonymous) clams this was said by Zynga founder and CEO Mark Pincus in one of the first meetings he attended.

“I don’t fucking want innovation,” the ex-employee recalls Pincus saying. “You’re not smarter than your competitor. Just copy what they do and do it until you get their numbers.”

And this the Playstation Move and Kinect were born. 😛 I wonder if Pincus is related to Eric Bauman.

SF weekly interviewed several former employees who all said that stealing other companies’ game ideas and then using Zynga’s market share to crowd out the games’ originators was business as usual. How did Zynga respond to these allegations? They didn’t. According to their PR representative Michelle Kim, of Brew Media Relations, Zynga will not answer press calls without a guarantee of positive coverage.

“Unless they know everything about the article, and that there’s not going to be anything negative in it, they’re probably not going to give anyone up” for an interview, she told SF Weekly. “It’s really hard to get them to say yes to press these days.”

So remember kiddies, If you steal IP fast enough you don’t even have to worry about lawsuits. “The revenue generated by this audience dwarfs the cash required to defray lawyers’ fees and a settlement payment, even one that runs to millions of dollars.”